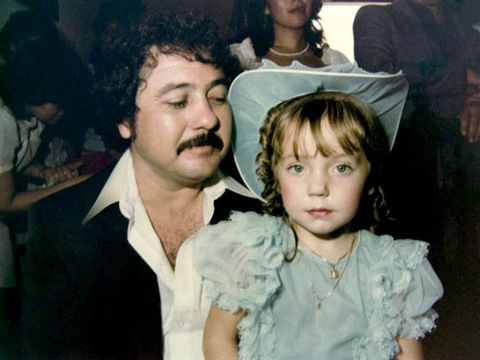 Estrella Hermila Ramos lives in the shadow of her father. The curvy 29-year-old hairdresser resides in his home, a spacious bi-level just off the beach, nestled in one of the tonier neighborhoods in Mazatlán, the de facto capital of Mexico's tourist-dense Gold Coast. In family albums crammed with festive photos, her husky father always looks dapper in snug-fitting shirts, unbuttoned to reveal tufts of chest hair. It's the same look he was sporting eight years ago when he was gunned down in his car by foot soldiers of the Sinaloa drug cartel. "He was a good dad, an excellent dad," Estrella says firmly, standing on the front porch as she takes a long drag on a Marlboro Red. "He put his kids first. I loved him for that."

To hear Estrella tell it, Juan "Johnny" Ramos was a devoted family man. He sent his children to private schools, outfitted his wife in designer fashions, and invited the neighbors over for lavish barbecues. She's hard-pressed to concede that her father was also a corrupt cop who moonlighted as an up-and-coming player in the Sinaloa cartel, one of the biggest suppliers of cocaine to the United States. (The head of Sinaloa, Joaquin "Shorty" Guzman, was recently listed by Forbes as one of the world's richest people, with an estimated fortune of $1 billion.) From his headquarters—the home where Estrella now lives—Johnny oversaw incoming drug shipments, political bribes, even targets to take out.

"I'm not saying it's right, but when you grow up with the cartels around you, you start to see the benefits of this business," Estrella says. Which is why she didn't wallow in grief after her father's murder, didn't wring her hands. Instead, Estrella took a cue from his playbook and fought to reclaim the family business for herself.

Mexico's increasingly ruthless drug trade is no place for a woman. The worst kind of macho, the work is gruesome: 5612 people were murdered in narco-related executions last year, many by decapitation, now a preferred technique. But in recent years, the estimated $40 billion industry has gone coed, largely because women operate more freely here—no one suspects them of such sordid business. Women now front the cafés and salons that cartels use to launder money, and ambitious gals can go even further. Two years ago, police captured Sandra ávila Beltrán, a skintight-jeans-clad stunner who lorded over the lucrative cocaine pipeline between Mexico and Colombia. Last Christmas, beauty-pageant winner Laura Zúñiga was stripped of her Queen of Hispanic America title after being busted with her beau, a suspected cartel capo, for alleged gunrunning—fresh evidence that the insatiable cartels were becoming equal opportunity employers.

Estrella never doubted she could make it in this world—just to look at her is to know she's got game. She sparkles all over—her belt is covered in rhinestones, her eyelids are dusted with glittery blue shadow, her bedazzled fingernails flicker when-ever she lights a cigarette in the musty living room crammed with her father's furniture (a mahogany armoire, an upright piano, a crystal chandelier). Tucked away in the corner is a liquor trolley, its dusty bottles clearly untouched for some time. "My dad liked his cocktails," says Estrella, her heels clacking loudly on the ceramic tiles. "He jumped at the chance to fix guests his favorite drink: tequila with coconut milk."

Later that day, Estrella makes the 10-minute drive to her mother's condo in the historic center of Mazatlán. Acela del Carmen Lizárraga is a large, doughy woman who spends most of her daughter's visit seated, hands folded in her lap, on a long vinyl sofa. Estrella falls into the couch next to Acela and thinks back to when, exactly, she figured out her father was involved in the drug trade. She was a child, she says, maybe 7 or 8. "Don't repeat what you hear in the house, don't tell people any of our business," her father admonished her, leaning over to look directly into his little girl's big blue eyes. He was referring to the late-night visitors, to the fact that theirs was the only house on the block with a fax machine. One day after school, she ventured into her parents' dimly lit bedroom—always off-limits to Estrella, her two older sisters, and younger brother. Quietly, she opened the closet door and gazed upon the suit jackets and linen guayabera shirts. Then, in the corner, she spotted them: a stash of high-powered rifles rolled up in heavy wool blankets, their barrels visible. "It just became obvious to me," Estrella says, pushing her D&G sunglasses on top of her head. "We had things in the house that none of my other friends had."

This is what Estrella has pieced together: Her father joined the cartel in the late '70s. As a police officer, he was a prized recruit. A natural, confident leader, he often spent late nights huddled in the living room with his underlings, the vague outlines of guns visible beneath their jackets. When he wasn't working, Johnny tended to his family. "He'd feed the kids, get up in the middle of the night to change diapers," Acela recalls in a deep voice weathered by cigarette smoke. On weekends, he whisked the family off to countryside haciendas for backyard blowouts that featured bands like Los Tigres del Norte, the superstars of norteño, accordion-rich country music favored by drug kingpins. (Their first hit was titled "Contraband and Betrayal.") "I loved it—the live music, horses for the kids," Estrella gushes. "When you're connected to the cartels, you become the daughter of so-and-so. Doors just open."

The older she got, the more Estrella realized that her mother, a grade-school teacher, was in on the action, too—accompanying her husband on weekend "business trips," leaving Estrella's older sister to babysit. After Johnny's death, Acela confessed to Estrella that she'd actually gone on drug runs; on one trip, she escorted a double-trailer truck packed with coke to the Texas border, then watched as paid-off border guards spirited the stash into the United States. "It was all fixed from the top," Acela says.

Strange as it sounds, the Ramoses were old-fashioned, stern parents who insisted that their kids finish their homework and abide by curfews. When Estrella, a straight-A student, scored a scholarship to study education in Guadalajara, her father put his foot down. "He said, 'Do whatever you want. But you'll do it in Mazatlán,'" says Estrella. "My father wanted us to take the traditional route, to get married young and have children. He wanted us to stay together." Disappointed, Estrella nonetheless complied. After high school, she married the son of a local shrimp-factory owner. A year later, she gave birth to a daughter.

At a certain point, Johnny started indulging in cocaine himself, and soon became addicted. He brazenly cavorted around town with a mistress, and over-the-top shopping sprees left him massively indebted to the cartel. Acela packed her things and contemplated divorce. Estrella, whose marriage fell apart after three years, moved back home with her daughter. Then, one sunny afternoon in 2001, as Johnny parked his Nissan sedan outside a nearby bodega, he was killed in a spray of bullets. "My little brother ran over to the house yelling that Dad was dead on the street," says Estrella in an almost childlike voice. "I saw my dad's feet dangling over an ambulance gurney. It's the worst image of my life."

Johnny's hard partying left Acela thousands of dollars in debt. She'd get by on her teacher's salary, but not in the lifestyle anywhere near the one her husband had provided. "I was ambitious," Acela admits, straightening out her tight-fitting slacks, her once-fetching figure gone. "Too ambitious. Traffickers enjoy privileges and command a certain respect in society." Barely a year after her husband's death, Acela called one of his associates and offered up her services.

She started out small, dealing to the city's affluent party crowd. "She looked desperate, running around in the middle of the night delivering drugs," Estrella says of her mother. "I told her, 'This is ridiculous. Let me help you.'" Of course, Estrella's motives weren't entirely selfless. Eking by as a manicurist, she resented the turn of events—she too once enjoyed the languid lifestyle of weekly manicures and gossiping with girlfriends. "For years we were used to the idea of easy money," Estrella says. "It was greed—we wanted those days back."

Within months, Acela and Estrella were business partners. Mom cut, weighed, and bagged the cocaine; daughter handled customer service. Like her mother, Estrella started out small, selling to musicians and executives. But the pair climbed the cartel rungs together, eventually handling payoffs to politicos and passing along information to cops on the take. A self-proclaimed daddy's girl, Estrella now felt closer to her mother than ever before, bound by the thrilling, treacherous work and its rewards. They pulled in $1000 a week, double what they made at their day jobs. Then they frittered it all away on expensive clothes and all-night outings at plush restaurants and clubs. "We thought we were untouchable," Estrella says.

It went on like this for nearly two years, until Estrella took up with a crooked cop who doubled as an informant for one of the local drug gangs. Against her mother's advice, Estrella invited him to hang out inside her home, where she fielded calls from her clients. Shortly after, police busted Acela as she was delivering coke to her daughter's home. She was sentenced to four months in a Mazatlán prison. While bribing prosecutors for a reduced sentence is common practice in parts of Mexico, neither of the Ramos women will comment on how Acela secured such an unusually lenient sentence.

The arrest should have served as a warning to Estrella, but the cash proved too compelling. While her mother was in prison, Estrella continued dealing and doled out cash to cops until there was nothing left to give. In 2004, a month after her mother's release, Estrella was pulled over while driving, charged with distribution, and sentenced to 40 months in prison. "I couldn't pay the bribe when I was arrested," Estrella says.

Since her release from jail in April 2008, Estrella has opened up a small salon called Star Beauty (estrella means "star" in Spanish), while her mother, now retired, spends her days watching telenovelas. "I'm trying to teach my daughter the value of an honest living," Estrella insists, noting how difficult that is in a society subsumed by narcocultura. Estrella's daughter, now 11, rattles off the names of Mexico's top drug lords with the same giddy delight that American girls her age devote to the Jonas Brothers. Will Estrella ever deal again? She digests the question for a long while, forgetting to ash her cigarette. "The idea that it's a bad thing to do sort of wears off," Estrella explains—before admitting that she threw away four years of her life for a few luxuries. "It's twisted, but that's how things play out here."

Monica Campbell is a California-based journalist who reports on Mexico for The Christian Science Monitor and Newsweek.