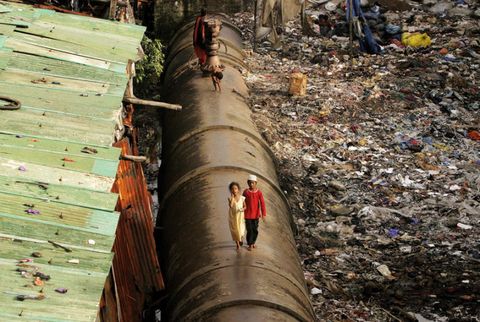 You're known for immersive reporting on poverty. But we heard you took a break for a while — what brought you back?

I tripped over an unabridged dictionary and punctured my lung! I love what I do, writing about poverty — I've covered Katrina survivors, welfare moms, factory workers — but it's physically taxing, and after I got married, I thought, I can't abuse my body anymore, I have obligations. So I stayed home. But when I got injured while trying to preserve myself, I thought, This is so stupid. I should be out doing the work that I love.

Your husband is Indian. Did he introduce you to India?

Yes, we spent every moment we could there. The country is changing so much — there's a lot of new money. I wondered, How are all these skyscrapers and fancy restaurants affecting people in the slums? And in India, as in the United States, I found the people most ready to pontificate about what it's really like for the poor aren't actually spending much time with them. There's a lot of ideological point scoring and not enough intimate reporting.

You spent three years reporting on life in Annawadi, one of Mumbai's toughest slums. Why that one?

I wandered into Annawadi, which is adjacent to the Mumbai airport and a Hyatt hotel. Piles of garbage, on top of which water buffalo were eating and children were running around. I felt like, Here it is, the epitome of a modern city — the rich literally looking down from the Hyatt and the poor looking back up at them. Then I met Manju, a teenage girl reading A Midsummer Night's Dream on the side of a sewage lake, and I thought, This isn't anything I have ever read about.

You're a blonde American woman. How did you blend in?

In the first month, I thought, This is impossible. Everywhere I went, people would point and scream. I was a freak attraction. But after two months, it calmed down, and after about four months, I was just a boring person who happened to be there.

It's particularly bad. Several women set themselves on fire, poisoned themselves, and otherwise tried to take their own lives. You know, people who tend to do this kind of reporting are usually men. But women need to be able to talk to other women. There has been a lot written recently about how the lives of women are changing — educated, elite women. But I wanted to explore whether it was really changing for less privileged women.

How much time did you spend, all told, in the slum?

I was there at all hours for three years. Often, I was writing about young thieves who were stealing from the airport in the middle of the night. To understand their work, you had to go with them.

Violence seems to be a fact of life there. Were you afraid?

Parts of it were dangerous. My translator and I both say we would lie awake in bed months later, thinking, I can't believe we risked that. We put ourselves in harm's way. We were threatened — a boy I'd spent a lot of time with ended up dead. But for me personally, the worst experiences weren't with criminals but with the police, who roughed us up.

When you read this book, you can't help but ask yourself, Could I survive life in the slums?

I think life is becoming more volatile for all of us. I came back from India, and my friends in the U.S. were losing their jobs. Part of what I tried to capture in this book is how people with very little support improvise to improve their lives in an incredibly unstable world, and what intelligence and ingenuity that takes, whether it's surviving by selling snarled cassette tapes and bottle caps or profiting off corruption. We often have an exaggerated sense of what nonprofits and governments are doing to help the poor, but the really inspiring thing is how much the poor are doing to help themselves.