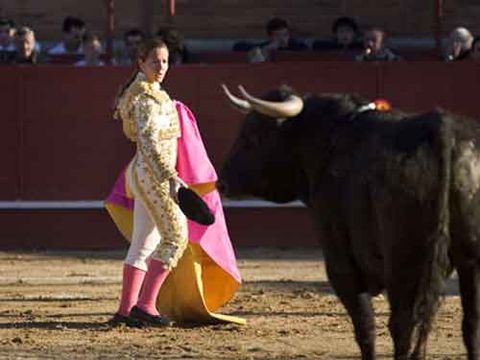 She's been gored more than once, but Spanish bullfighter Ana Infante knows how to stand her ground.

Killing a large woolly mammal does not top most women's wish lists, but Ana Infante, in her mid-20s, has been training as a bullfighter since age 13. Gender is no obstacle. "The bull doesn't ask what sex someone is," she says. "He just wants respect.

A fight can last several hours. "I've been in a few dangerous ones," Infante says. "Once I faced a bull who, although I didn't know it, had already been in a fight." (Bulls with previous experience aren't used because they quickly learn to become killers.) "I was scared. It was a real life-or-death situation."

As for battle scars: "One bull gored me in my shoulder during a fight, and now I have an artificial bone there," she says. She has also had knee, hand, and groin injuries. It's not exactly a lifestyle that lends itself to domesticity, but Infante alludes to a secret crush: "I follow the bullfighter's maxim: 'To ply this trade, you have to be solitary, crazy, and unmarried — and you have to be in love.'"