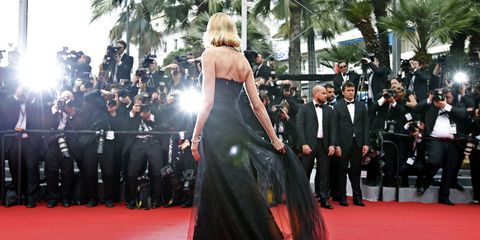 Right now, on both ends of the United States, Prom Prep for Famous People is underway. Polaroids are being snapped and critiqued. Flashlights are being shown through skirts to test for overexposure—unless that's what the client's career requires. Barre-toned legs are being poked through slits, cutout-framed abs are being sucked in, and any other movable body parts are being practice-manipulated so that, at Sunday evening's VMA Awards, the design features surrounding them can be shown off to their greatest advantage.

As if we've been in those shoe- and minaudière-lined rooms ourselves, our brains can easily recall and play back this scene, mostly because "Getting Ready for Event X with Celebrity Y!" photo diaries are so immersive and easy to put together (the real reason) that publications can't help but run them. But what we still don't get to see is the high-level political maneuvering it takes for a stylist to get a celebrity into a dress—her dress, if everything pans out. Negotiations. Eleventh-hour dropouts. Doctorate-level calculations factoring in the likelihood that a client will be included (favorably) in the next morning's roundups.

This is the stylist's raison d'être: 1) to win attention, preferably positive, for the client, 2) to make her feel good about herself, and 3) to craft A Moment. The second point can contribute to the first, the first can boost the second after the fact, and all three can be accomplished in one fell swoop if the Hollywood Reporter or WWD approves of her choice.

"When you're on the best-dressed list, you know you made the right decision. If it's a shot where she's voted 'do not like,' you kind of move on."

"What is gratifying to me is when you open the trades the next day and the trades, the magazines, are talking about her," says Eric Archibald, costume designer and stylist to Jennifer Hudson. "When you're on the best-dressed list, you know you made the right decision. If it's a shot where she's voted 'do not like,' you kind of move on—as long as the client is getting the accolades that you worked so hard to get, that's what it's about."

To win these trophies, stylists engage in a kind of cordial cold war where everybody knows everybody else's hands, but you still have to wave and smile, because you never know when you'll need to call in a favor. It begins months before an event, when the stylist attends shows (or stalks them on websites—you can sometimes see the clothes better that way), contacts the fashion houses, and begins culling the best, most appropriate pieces, which she'll then, if she's like Charlene Roxborough Konsker, arrange in rainbow order for her client to try on. They can both tell right away which one's supposed to make it onto the red carpet.

Even after selects have been made and seamstresses flown in from Paris to take up hems, there's still time for stylists catering to stars higher up in the pecking order to throw their weight around, sending their counterparts scrambling to invoke Plan B or C or D. "The bigger the name, the bigger celebrity, the more you can hold on to. The more you can get away with," Archibald says. (With so many different stylists carving out so many distinct styles, dress poaching doesn't happen that frequently, but some clients still opt out entirely, preferring to buy outfits off the rack. Hayden Panettiere did that for the 2014 Golden Globes and caused a kerfuffle when Tom Ford confirmed he had dressed Naomi Watts exclusively that night. He later sent her white roses and a note that read "You looked beautiful.")

Why not just go with an emerging designer or vintage then? "It's a matter of status," Archibald says. "We live in a world where everyone wants to be in the best of a best and wants to have the word 'Chanel' on her lips or 'couture' or 'Versace' or 'Dior.' Not since Julia Roberts wore the black and white Valentino do we see much vintage on the carpet. Vintage is still being pulled, but celebrities are so embedded with designers, you just don't see as much."

The prize for playing the game well, commonly reduced to "having a good eye," can make all the diplomacy and last-minute change-ups worth it. One's taste can be leveraged into a reality-TV contract (Rachel Zoe), a clothing line (Brandon Maxwell, Rachel Zoe again), or fame in one's own right (Micaela Erlanger, Kate Young, Rachel Zoe times three). Along with the professional satisfaction, there can also be financial compensation. Not all of them work like this, but not all of them can resist the painless $50,000 checks that come signed "Love, Big-Name Designer" either. Six-figure deals brokered between fashion houses and celebrities (one digit less for the stylist) aren't exactly a secret with reports of Jennifer Lawrence inciting a bidding war between jewelers and Tiffany & Co. paying Anne Hathaway $750,000 to wear its $10 million Lucida Star necklace to the 2011 Academy Awards. As Jessica Paster said at the Vulture Festival's Hollywood Power Stylist Panel earlier this year, "If it looks awful on you, $100,000 or $250,000 is not worth it, but if it looks gorgeous and this is the dress you were going to pick anyway, why not get paid?"

The gatekeepers of the dresses—the designers and their satellite PR people—have to run their own opportunity-cost equations, although theirs take into account even more variables. What is her relationship with the brand? How will her appearance translate into sales? (A representative for Elie Saab once, rather snobbishly, told Vanity Fair of the label's no-B-list-actresses-allowed policy, lest an errant former child star put Queen Rania of Jordan off rhinestone-dredged cupcake gowns for good.) How will letting this woman wear this dress raise my stock?

A Balenciaga-packed promo tour can launch an ingénue with a 4-inch IMDB filmography into another bracket of movie star.

This sort of attitude introduces a quandary for the actress, for whom style can equal power. A Balenciaga-packed promo tour can launch an ingénue with a 4-inch IMDB filmography into another bracket of movie star, but like the meme-y millennial rant "need a job to get experience/need experience to get job," actresses need to have clout to access the best stuff, with which they win more esteem. And even though a spectacular premiere or a series of them—think Emma Stone for Spider-Man 2—can draw additional publicity to a movie, some studios still consider stylists an unnecessary expense.

But the way the stylists see it, picking out clothes for famous women is a purely artistic pursuit, sort of like navigating the tricky passages in a Liszt concerto but even more like painting the Annunciation. Sometimes the skin turns out rubbery and bloodless, and Gabriel looks creepy AF; sometimes you end up with a Memling. The reward here isn't to please your benefactor/God, though—it's bigger than that.

It's changing the course of fashion. It's moving astronomical amounts of money. It's reviving the entire emerald industry. It's creating an image that lives on forever.

Maybe that's why any of them go through the trouble of constantly asserting their relevancy. Maybe thousands of years from now, when some future digital paleontologist uncovers People or E! or Marie Claire, he'll look upon our iconography—the Angelina leg, the naked dress, J.Lo's glistening sternum at the 2000 Grammys—and write, "They were beautiful. They were great."

It's a holographic existence, but it's also immortality. And who doesn't want to be remembered?

Chelsea Peng I'm Chelsea Peng, the assistant editor at MarieClaire.com.
This content is created and maintained by a third party, and imported onto this page to help users provide their email addresses. You may be able to find more information about this and similar content at piano.io
Advertisement - Continue Reading Below
More From Best of the Red Carpet 2021
50 Celebrities on Their Very First Red Carpet
The Best Looks of the Oscars After-Parties
Advertisement - Continue Reading Below
Did You Spot Charlize Theron's Hidden Hair Detail?
Timmy Photobombed Margot on the Oscars Red Carpet
Leonardo DiCaprio's Oscars Date Is...Not His Mom
Saoirse Ronan Debuted Micro Bangs at the Oscars
Charlize Theron Wore a Sexy Thigh-High Slit Dress
The Most Gorgeous Beauty Looks at the 2020 Oscars
Oscars Red Carpet Looks We Love
Zendaya Is Bulgari's New Face