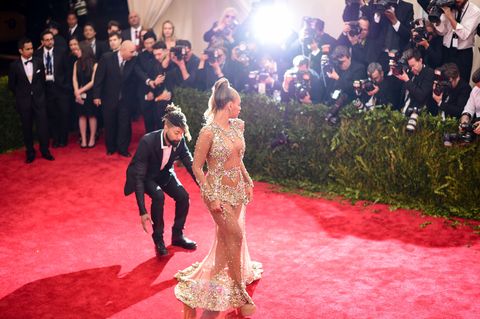 If Taylor Swift's crew has graduated from friend-group-with-a-handbook to the corps d'élite of young, female famous people, then celebrity stylists are S.H.I.E.L.D, circa Nick Fury.

One of their most important duties is red-carpet fluffing, or when they walk a few paces behind Beyoncé or Ciara or whomever and arrange their Givenchy gowns so that they drape becomingly for the camera. But, as we learned when we spoke with three stylists who've held Hollywood's highest-earning/most popular/chicest trains in their hands, it's so much more than shifting around some tulle.

It's more of a military operation than anything else

That's right—and some red-carpet appearances are actually *better*-planned than, say, that one disastrous time in Cuba. "Even before a celebrity leaves the room, there is a conversation that is had about what's going to happen and who's going to go with her," says Eric Archibald, costume designer and stylist to Jennifer Hudson. "I'll go through poses with her and tell her how to stand, how to hold her feet, whether to put the left hand up or the left hand down, pretty much making sure whatever gown she's wearing is portrayed in the best light."

Then there's the whole question of getting there. If you're wearing a huge, fluffy gown, you simply cannot take a sedan because of the creasing, says stylist Marni Senofonte, who's worked with everyone from Kim Kardashian to Mary J. Blige to Beyoncé and Nicki Minaj on the "Feeling Myself" video. "There have been times when I have been in a car with someone who has almost had to lay themselves out so we don't get wrinkles. It's so funny though because these images are captured and you don't really think about everything that went into it. All of the criticism comes from that picture, but you forget about the logistics."

Speaking of haters, a great feminist point from Beyoncé's stylist Ty Hunter on *why* they have to take getting ready so seriously: "It's so hard for women, the whole process of the carpet. When they get dressed, they feel beautiful, but they have to worry about getting attacked the next day. It's just a lot."

No, they don't really care about what *they* wear on the red carpet

"There's been a time when I wasn't able to get dressed because we went over in the fitting and things happened, so it's like, 'Oh god, I can't even put my suit on,'" says Hunter. "So I ended up going to the Met in some cargo pants and tennis shoes. If I'm able to put a tuxedo on, then great. Everyone wants to look great, but as far as bending down and doing my job, you may catch me in a few photos with a frown. I'm not going to be smiling the whole time. The day you see me in every photo smiling, I'm no longer working—I'm there attending. But that's just what it is. At the end of the day, it's about your client being happy and looking great in every photo."

For the record, Archibald says he aims to look "as sleek and tailored as possible," and Senofonte likes sporting sweats with a pair of treaded Alaïa booties she says she could wear to climb Mount Kilimanjaro. (She also advises against low-rise jeans because of, you know, the crack.)

Their fluffing can prevent an Incident from happening, and we don't just mean wardrobe malfunctions

"Last year at the Billboard Awards, Kelly Rowland was pregnant and we didn't want to tell anyone yet, so there was a little bit of a moment where I was constantly looking at her stomach to see if she was sucking in or not sucking in," Senofonte says. "She was far enough along that, if she let her breath out, you would see a bump. Another thing with that dress was letting her legs show, so I was constantly trying to open up the dress so you could see the two high slits—constantly making her push her leg out and suck her stomach in."

She did good, eh?
Getty

Their fluffing can also make or break an entire industry

"So many people pooh-pooh stylists," Senofonte says. "They're like, 'Oh, you're a glorified shopper.' And it's like, "Yeah, we do shop but what we do is valuable.' It's like that scene in The Devil Wears Prada where Meryl Streep explains the blue sweater. It's not just a dress. Thoseemerald earrings Angelina Jolie wore on the red carpet? I've been asking Lorraine Schwartz to do a short movie about the power of that one pair of earrings, because that one pair of emerald earrings Angelina wore to the Oscars changed the emerald industry, which was kind of tanking. People who don't even know I know Lorraine Schwartz, like emerald dealers, they think of her as this god, that she revitalized the industry. It's really amazing."