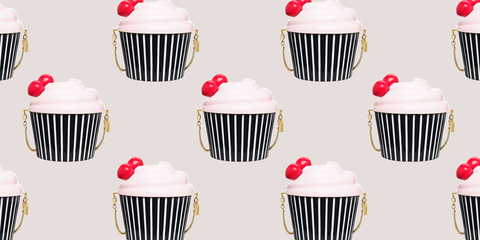 Kate Spade might be expanding her brand to include "athleisure fitness" and carpeting, but she's not turning her back on the thing that made her Queen of sparklescuteglitterkitsch: dessert.

In collaboration with Magnolia Bakery—the New York-based sweets shop people line up in front of instead of sensibly decamping to any of its 75 million other locations because the Greenwich Village one was where Carrie and Miranda ate cupcakes—the designer is releasing a capsule collection of bags that resemble cookbooks, banana-pudding tubs, and gateaux piped with ombré buttercream ruffles in shades of pink.

The price caps at $348 and begins at $78 for a frosted-cupcake keychain. Look out for the full range in stores and online Oct. 12, and don't forget to bring your insulin.

Chelsea Peng I'm Chelsea Peng, the assistant editor at MarieClaire.com.
Advertisement - Continue Reading Below
More From Fashion
We Found the Best Modest Swimsuits for Summer
Fashion Comes Together to Fight Coronavirus
Advertisement - Continue Reading Below
Your Official Guide to the Royal Family's Tiaras
20 Women-Owned Small Fashion Brands We Love
Everlane Is Having a Sale on Its Coziest Clothing
All the Different Ways to Wear a Floral Skirt
Yes, You Need a Pencil Skirt
Anthropologie’s WFH Edit Is 40% Off Right Now
52 Celebrities Who Mastered ﻿'80s Fashion
Shop Adidas' Sale for Cute Home Workout Outfits