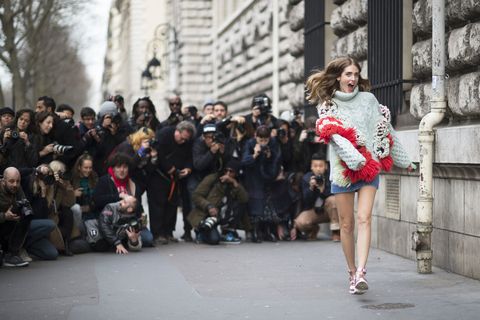 Seven years ago, after a bad breakup, Arielle Charnas was looking for a way she could get back at her ex. So she started a blog.

"I wanted to get revenge and look really good on the Internet so he would see. Eventually, he began to fade, and I fell in love with what I was doing every day," says Charnas, the 29-year-old behind the wildly popular fashion blog Something Navy. "Everything changed for me once Instagram launched, followed by Snapchat."

Post by post, each documenting her oh-so-stylish skinny jeans, designer satchels, and balayage highlights, she has cultivated a social-media empire, with 892,000 devoted followers on Instagram; last year she appeared in a commercial for Tresemmé shampoo, the kind of endorsement deal usually conferred on TV or film starlets.

The '80s had Christie, Elle, and Iman. The '90s had Cindy, Heidi, Kate, and Naomi. The Victoria's Secret girls dominated the 2000s. But these days, runway phenoms Gigi and Kendall share the spotlight with a new cadre of young, hyper-chic so-called influencers.

Every decade has its It girls. The '80s had Christie, Elle, and Iman. The '90s had Cindy, Heidi, Kate, and Naomi. The Victoria's Secret girls dominated the 2000s. But these days, runway phenoms Gigi and Kendall share the spotlight with a new cadre of young, hyper-chic so-called influencers whose massive followings on social media have crowned them celebrities in their own right. Arguably the most famous among them: Chiara Ferragni, the 29-year-old, Italian-born, Los Angeles-based blogger and creator of The Blonde Salad, whose 6.2 million following on Instagram beats that of Lena Dunham and Mindy Kaling combined; L.A. fashion-and- interior-design starling Aimee Song, whose Song of Style garners 2 million page views a month; and, of course, Leandra Medine, better known as "Man Repeller" to more than 2 million fans who track her anything-goes fashion concoctions across Instagram, Facebook, and Twitter.

While the term "influencer" has the esoteric ring of other, equally vague titles like "adventurer" and "thought leader," the fashion-focused digerati are building real businesses—and making serious bank—off their social-media feeds. Take Ferragni, who launched The Blonde Salad in 2009 and almost instantly garnered the attention of fashion-obsessed fans and insiders. According to a Harvard Business School case study of The Blonde Salad, published last year (and you know we've reached a tipping point when the most venerable b-school in the country takes on fashion bloggers), Ferragni initially made money off her blog with banner ads, but soon realized she could make substantially more by posting "sponsored content"—write-ups that brands pay for—and then pocketing a portion of any sales that resulted from her fan base. As her popularity grew, so did the revenue opportunities: She now commands as much as $50,000 to host events, has launched her own shoe line, and is tapped by A-list brands to develop exclusive content. (In 2014, YSL hired her to promote its Black Opium perfume.) According to Harvard, by 2014, Ferragni was employing 14 people and had generated nearly $7 million in revenue.

by 2014, Ferragni was employing 14 people and had generated nearly $7 million in revenue.

"[I think that] to be successful in whatever you do, you have to be passionate, dedicated, and a bit crazy," says Ferragni, via e-mail. "This mix of willingness and passion made me the businesswoman I am now."

Here's how it works: Brands tell Nord how much they want to spend on a social-media campaign. He cross-references that budget against a proprietary ranking of influencers his firm has devised based on an algorithm that measures upwards of 30 data points, including the growth of an influencer's following, the frequency of posts, and all- important "engagement rates" (how much time users spend reading posts, liking them, and sharing them). He whittles the list down to those in the right price range and who complement the brand's audience goals. His agency then reaches out to the influencer or her agent—most A-list influencers have one—with an offer. There's no negotiating. It's either take it or leave it, thanks to the legions of other social-media up-and-comers waiting in the wings to cut a deal.

Everything an influencer does has a price attached, like the luxury amenities in a car. You can buy a basic sedan for $20,000, but leather seats and a moonroof will cost you nearly double that. As Nord explains: "The brand will pay more for one or two hashtags. If you have to actually tag the brand instead of just mentioning it in the caption, that changes the price. Are you posting on a Monday morning when people are most engaged, or on a Sunday afternoon when people are taking a nap? Everything needs to be figured out and billed ahead of time."

To be clear, all that cash doesn't go to an influencer's bottom line. Social-media style stars can foot all the expenses associated with their posts, including the photographer—most photos are shot by a professional—lighting, makeup, and hairstyling. (For example, Something Navy exclusively uses fashion photographer Alexandra Wolf.) A single shoot can easily take one or even two days and cost in excess of $5,000.

In June, Medine posted an item titled "How Man Repeller Makes Money" to her blog, ostensibly in response to the keen media interest in her growing empire. In it, Man Repeller's digital director, Kate Barnett, is quoted as saying, "Our sweet spot has always been integrated editorial, which is a form of native advertising." While Medine would not comment on how much she pulls in, industry experts speculate that Man Repeller earns at least $1 million annually.

So what exactly do the brands get in return? Access, for starters, primarily to the coveted Millennial demographic. Though Instagram is effectively a business platform for these girls—posts are, in essence, ads—the distinction is lost on users who still view these bloggers as "real girls"; their endorsements feel like word-of-mouth recommendations from a trusted source. "There are a ton of different aspects of creating a successful post, the most important being authenticity. I don't support products that I don't truly believe in, which creates a trusting bond with my readers," says Danielle Bernstein of We Wore What, who has more than 1.5 million Instagram followers, crowning her a top-tier influencer.

"Influencers reach hundreds, thousands, even millions of customers via their collective social channels. Their followers want their lives, want to eat what they eat, wear what they wear—which means that they have a huge impact on decisions their audiences make when it comes to travel, restaurants, fashion, and beauty," explains Rebecca Alexander, cofounder of Socialyte, which bills itself as an "influencer casting agency." "They're the reality-TV stars of the Millennial generation. Billions of dollars' worth of product has been sold due to influencers."

And because social media isn't immune to inflation, even "mid-tier" influencers—defined as having 150,000 to half a million followers—can make a tidy living leveraging their "fame." "Many top talents have outpriced themselves, charging up to six figures for a few Instagram posts, which don't prove a return"—the efficacy of an influencer is measured by how many users click on links to buy—"and the middle-tier group, the ones we'd consider 'micro-influencers,' are less expensive, willing to work harder, are more flexible with the brand's creative vision, and reach a niche audience that brands want to connect to," Alexander says.

Heidi Nazarudin quit her $400,000-a-year job as an investment banker for Citibank to launch The Ambitionista in 2009. Though she doesn't match her previous salary—and won't say how much she pulls in—she's nonetheless amassed 237,000 followers on Instagram and has collaborated with a slew of blue-chip fashion brands. "My average campaign is around $3,000, but it can go all the way to ridiculous numbers," she says. (A campaign can range anywhere from a single blog post to a social-media package, as well as appearances at events.) Nazarudin isn't always paid in cash. Recently, an iconic fashion label flew her to Milan (first class, natch), where she enjoyed fittings with the line's top stylists and traveled home with a suitcase full of designer clothes. (In return, she wrote a glowing blog post about the trip and posted a handful of Instagrams.) And it's not just fashion brands that are willing to pay for access to her. LAX airport, in Los Angeles, hired her to promote new upgrades at its terminals, including luxury lounges and cafés, all of which she touted on her blog and Instagram.

"I tell younger bloggers that they need to hire an agent before they actually need one," Nazarudin adds. "It's easier for the brand to talk to the agent about money. Brands are more sophisticated about the bloggers they want to work with. They're more demanding, and it's easier to have someone else negotiate for you."

It's easier for the brands, too, which may find it otherwise challenging to navigate the nuances of social-media celebrity. "The number of people with fake followers is far bigger than people think it is," says Kelly Brady, CEO of Brandsway Creative, a boutique PR firm that helps brands plan influencer campaigns. (Some influencers pad their followings by buying "ghost followers.") "There are some influencers with 50,000 followers who really move product, and some with a million whom you won't see one sale from."

"There are some influencers with 50,000 followers who really move product, and some with a million whom you won't see one sale from."

Natalie Mackey, cofounder of the recently launched beauty brand Winky Lux, sold exclusively online, eschews traditional advertising in favor of social-media campaigns with beauty stars, which she says is more effective. But figuring out whom to work with is always a gamble. "It's like the great California gold rush—and everyone wants their own pick and a shovel. In this case, the pick and shovel are an iPhone and an Instagram account," Mackey says. "Sometimes they have an agent. Sometimes you e-mail the girls directly. Sometimes those agents aren't really agents and have never worked with a brand before. It's hard to figure out the right people to be working with right now. We've been seeing a Kardashian effect when we start talking to influencers these days. It seems like anyone who once ran into the Kardashians is trying to be an influencer."

Mackey says influencers demand anywhere from $5,000 to $100,000 to plug Winky Lux. Figuring out who's worth the investment—deciding whom a small, cash-strapped startup should risk its marketing budget on—is more art than science. "Many are lovely and professional, and move mountains' worth of product, but there's no standardized price point," she explains. "Some of them have incredibly large egos. Sometimes I wonder, How does this person feel like they're entitled to be difficult when all they have ever done is get 500,000 followers on Instagram? There are dogs with 500,000 followers on Instagram."

While the Federal Trade Commission requires Instagrammers to note in posts whether they have been paid to tout products, by its own admission it doesn't police social media and handles transgressions on a "case-by-case" basis. (Good luck finding tags in posts explicitly noting sponsored content.) In 2013, venerable New York Times fashion critic Suzy Menkes assailed these social-media influencers for their preening at the expense of true style. Still others applaud them for opening up a cloistered and clubby industry once dominated by insiders. After all, what's not to celebrate about a world where young women—and it is mostly young women— can exploit their talents and build sizable fan bases, then leverage them for big bucks, minus the casting couches, sleazy managers, and cattle calls synonymous with breaking into Hollywood and modeling? "Influencers have completely disrupted the industry," says Mackey. "They are businesswomen who are basically running mini-empires on their own."

"Influencers have completely disrupted the industry. They are businesswomen who are basically running mini-empires on their own."

Call them whatever you'd like, but one thing is certain for this new guard of celebrities: Business is booming, with zero signs of slowing down. Hashtag blessed.