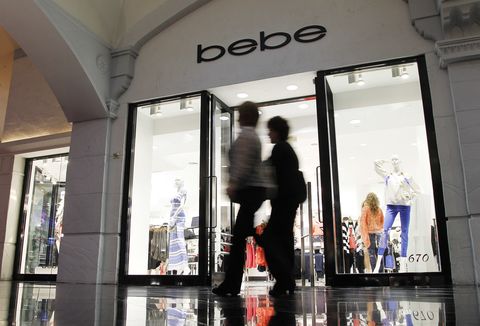 Pour one out for mall stores right now. Retailers like Macy's, Payless, and JCPenney have been quietly shuttering, and staples like The Limited are closing their brick-and-mortar shops altogether. Bebe has become the latest casualty, announcing Friday it would close all its stores.

CNNMoney reports that Bebe plans to shut down by the end of May 2017, though it's unclear at this point whether they'll go out of business entirely or just transition to online-only sales. As of March, Bebe had 134 retail stores and 34 outlet stores, and sold its products at another 75 stores.

Back in 2010, the Kardashian sisters had a partnership with Bebe.
Getty Images

News of their closing had been rumored for months, and shop associates had said liquidation sales were getting started as early as the beginning of April. Bebe, like many of its competitors, felt the harsh effects of online shopping—and couldn't keep up with behemoths such as Amazon.

You can find a full list of the Bebe stores that are closing here, in case you want to stock up at a steep discount while you still can. And hey, maybe it's time to root around in the back of your closet for one of those tight dresses from your "going-out" days and take it out on the town.

Advertisement - Continue Reading Below
More From Fashion
Spring Dresses to Beat the Winter Blues
Katie Holmes Wore a Cool Pair of Oxford Shoes
Advertisement - Continue Reading Below
What the Founder of Lingua Franca Wears to Work
The Best Grammys After-Party Outfits
The Spring Trends That'll Shake Up Your Wardrobe
Behold: The Sexiest Looks at the 2020 Grammys
The Best Red Carpet Looks at the 2020 Grammys
Shop Kate Middleton's Personalized Charm Necklace
PSA: Anthropologie Is Having a Sale All Weekend
Treat Yourself to These Pretty Lingerie Pieces