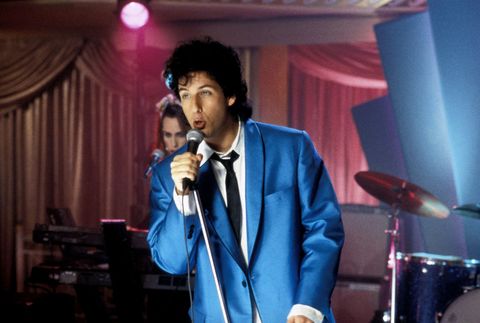 It's not just the Puffy Shirt fromSeinfeld or Bernie Muhf*ckin' Sanders—fashion really is loving a schlubby man these days. But for women. With some washing up and such sharp tailoring that it's like, "See what awesome magic our fashion powers can perform?"

So whereas Adam Sandler's blue suit in The Wedding Singer was rental-store ill-fitting and frightfully shiny, those that Hollywood's chicest have been trotting out lately are anything but. Take Blake Lively, who wore teal Brandon Maxwell to Variety's Power of Women luncheon Friday. (Trimmed and pinned to perfection, with an elongating, just-hovering-above-the-ground trouser hem that would make the most stone-hearted petite main weep.)

On the same day, model Doutzen Kroes attended a Tiffany party in Céline Resort 2017. Her blazer and trousers were in the color of the night—and of the moment—but gave off a bit of a different vibe with the boxy, slouchy cut. Crucial observations: a) upturned sleeves and hands in pockets for maximum insouciance/making sure it actually looks better than it did on-model; b) autumn's white boot ⏩ white shoes all the time. Also important to note that the pants have a dropped crotch and that I am into that, which is a testament to Phoebe Philo's hold over me. (I don't mind.)

Blue is a little more unexpected than pink, and it's funnily reminiscent of frilly shirts and bad haircuts from proms past. Plus there's the Beyoncé Bonus, meaning she did it first and probably better, but we can still try.