As science learns more about the complexities of PCOS (otherwise known as Polycystic Ovarian Syndrome), women are catching up, too. Zocdoc recently reported that over the last year searches for the term "PCOS" are on the rise, which hopefully means more of the projected 8 to 20 percent of women that have it are getting it checked out. The hormonal disorder is linked to a range of factors—from ovulation to insulin levels—so it's especially tough to diagnose, but also puts you at a greater risk of pre-diabetes, pre-cancer in the uterus, and cardiovascular disease (eek).

Since it's critical that women take the steps to learn about it earlier, here, some of the characteristics of PCOS along with next steps if you suspect you have it.

Discovered in the 1930s, PCOS was first known as Stein-Leventhal Syndrome, after the two doctors who put this research together. The doctors tested a small group of women with different characteristics—some were thin (one with severe cystic acne), others had male-pattern hair growth, and the majority were obese—but one trait in common. All of their ovaries tended to be elliptical and greater in volume than a typical ovary.

Carolyn Alexander, MD, an OBGYN and endocrinologist at the Southern California Reproductive Center, says that the genetic disorder shows up differently in each person. "In seeing a lot of women with PCOS over the years, I’ve found that every woman’s story is different. Every so often one of the ladies will say, 'I went from high school to college, and I got the Freshman 15. Except it wasn’t the Freshman 15, but the Freshman 30.' And then they started skipping their period and boom, it sounded like PCOS."

In other cases, she's seen women who’ve always had regular periods up until a point in their 30s when they developed higher levels of testosterone, for no specific reason.

Beyond weight gain and a disrupted period, some physical traits that can be warning signs for PCOS are thinning hair; male-pattern hair growth (AKA hirsutism) that can appear on your upper lip, back, sideburns, and upper stomach; and cystic acne. A velvety darkening of the skin at the neck or underarms, or between the thighs, is also common. Alexander explains that it's the result of insulin in the blood stream causing the skin to produce melanin. "That’s a worrisome clue that the body has insulin resistance, which can be a pre-cursor to diabetes," she adds.

If all this sounds a bit confusing, here's a breakdown in layman's terms of how PCOS plays out in your body.

For starters, the cause of PCOS is unclear, but it's likely a mixture of hereditary, environmental, and biological factors. People with PCOS tend to produce higher than normal levels of androgens—the male hormone—which creates too much testosterone in the body (hence the hair growth and cystic acne). Androgens also disrupt normal ovulation, which is why many women with PCOS experience irregular periods and infertility issues.

"In seeing a lot of women with PCOS, I’ve found that every woman’s story is different."

PCOS patients also tend to make higher levels of insulin, so it can put you on a fast track to developing diabetes. Insulin regulates your blood sugar levels, and when you have more of it, you gain weight and eat more. Up to 80 percent of women who have PCOS are also obese, which often means that they are insulin intolerant (basically, when your body doesn't respond to the effects of insulin, it produces even more of it). As luck would have it, your insulin intake also affects your androgen levels, so it's a vicious cycle of weight gain and irregulated hormones with PCOS.

If you suspect that you have PCOS, you can talk to your general practitioner or gynecologist, who can direct you to an endocrinologist or infertility specialist for further studies. Alexander says that testing for PCOS includes checking your blood for vitamin-D, testosterone, and insulin levels, along with a glucose tolerance test. A typical diagnosis is made if a woman experiences irregular periods, has high androgen levels, and has cysts on her ovaries, though not all of these are necessarily pre-requisites for PCOS.

Until there is a cure, doctors can prescribe methods to hamper the symptoms you're experiencing, whether that's through birth control (which can decrease the chance of pre-cancer cells in the uterus and decrease testosterone levels) or medication that can treat higher blood-sugar levels, hair growth, etc. For those experiencing infertility issues, The Advanced Fertility Center of Chicago notes that the vast majority of women with PCOS will be able to conceive through fertility treatments. 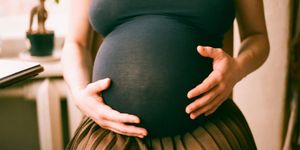 Could Acupuncture Get You Pregnant?

Another common suggestion for PCOS patients is exercise, since the hormones produced by fat cells can cause hormonal imbalances. "Losing as little as 5 percent excess weight can help women ovulate more regularly and lessen other PCOS symptoms," says The PCOS Awareness Association.

And to regulate insulin levels, Alexander recommends eating small, healthy, regular meals (that means not skipping breakfast, busy ladies, or saving dinner until after 8 p.m.). "Some people think writing down what you eat might also help," she adds, and recommends treating yourself to one cheat day during the week. It's a small comfort, but it's helpful to make all of this feel a little less burdensome.

Advertisement - Continue Reading Below
More From Health & Fitness
How to Have Healthy Convos Around Climate Change
How to Build a Mini Gym at Home
Advertisement - Continue Reading Below
Can't Find a Good Online Workout Class? We Gotchu
What It's Like to Be a Doctor Fighting Coronavirus
The Best Workout Apps for Women Who Want Results
LVMH Perfume Factories to Produce Hand Sanitizer
Why Social Distancing Is So Important Right Now
I Tested Positive For the Coronavirus
What Staying Awake for 36 Hours Does to Your Face
The Mental Health Apps Professionals Recommend