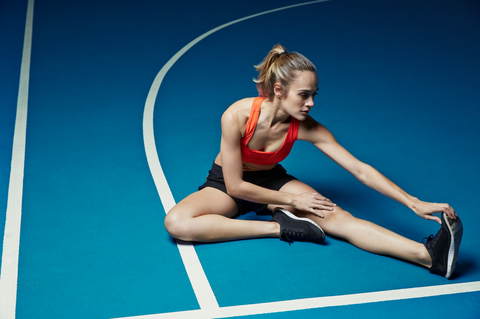 You have a life, and there's a bucket list of things you want to accomplish, like, learning how to speak French without an American accent or nailing a perfect contour on your first try. You're a working woman with sh*t to do, so why spend time sweating at the gym? Answer: because your body and mind want need you to.

While many people tend to exercise solely for leaner muscles or a trimmer waist, getting sweaty does way more for you than just changing what's in the mirror. Hey, we just heard you go "psh," so take it back and wait until you hear us out.

It can make you better at sex

Experts and studies always point out that regular physical activity boosts your arousal even if you're in a never-ending dry spell. And really, think about it: Yoga poses like downward dog sound all Zen-like, but those instructors are really just priming you for the bedroom. Namaste.

It fights off most major diseases

Breast cancer, heart attacks—which is the leading cause of death for all U.S. women—high blood pressure, stroke, hypertension, diabetes...need we say more? Unlike medications, exercise seems to be one of the most natural ways to keep healthy against most illnesses, and that's incredible.

It could lead to a higher salary

Ten bucks says the first thing you thought of was "I work hard for the money," and you're not off. A study from the Journal of Labor Research discovered that employees who regularly exercise made about 9% more than those who don't. Who knows what the relationship is there, but SoulCycle anyone?

Can we all agree counting sheep doesn't work? Okay, good. A 2013 poll from the National Sleep Foundation found that exercisers reported better sleep quality than non-exercisers. (Even though they slept the same amount on average).

You: "LOL." Us: We're dead serious. Experts suggest you should sweat out those alcohol toxins—now, how to get yourself out of bed is another thing....

It strengthens your relationship

According to a study published in the Journal of Personality and Social Psychology, couples who engage in "exciting" activities (get your mind out of the gutter: we're referring to exercise) reported more satisfaction with each other and greater intimacy. No, sex doesn't count as exercise...although it should.

It wards off wrinkles

Put away your fancy-schmancy face creams because research presented by the American Medical Society for Sports Medicine last year suggests that people in their 40s who exercised frequently (at least three hours of moderate to vigorous activity a week) had similar skin compositions—in the buttox specifically since it's rarely exposed to sunlight—as people in their 20s and 30s when examined microscopically.

It makes you a happier person

Elle Woods said it the best:

It helps you enjoy your job and your personal life

Because this is so freaking hard to do...one survey published in journal Human Resource Management found that people who exercised frequently during the week felt more confident in balancing their work and home life than others. Why? As Elle said, endorphins make you happy—and less stressed about everything.

It boosts your brain power

A Neurology study suggests that high levels of cardio activity at a younger age (think 18 to 30) improved participants' cognitive abilities 25 years later. Ahem, that's your cue to get moving.

The 20-Something's Guide to Preventing Wrinkles

15 Foods That Scientifically Alter Your Mood

Kenny Thapoung Social Media Editor When I'm not stalking future-but-never-going-to-happen husbands on Facebook, you can catch me eating at one of NYC's B-rated or below dining establishments—A-rated restaurants are for basics.
Advertisement - Continue Reading Below
More From Health & Fitness
How to Be More Spiritual in 2020
Sleep Supplements for Sweeter Dreams
Advertisement - Continue Reading Below
31 Must-Have Workout Apps for Women
Are New Year's Resolutions Still a Thing?
Gifts That Will Delight and Destress
Products Every New Mom Will Love
Found: The Best Running Sneakers
Debunking the Dangerous Hymen Myth
The Virginity Testing Crisis
Carpe Diem? YOLO? Here's What a Shrink Has to Say