About four years ago, I arrived at a friend’s Christmas party dressed as a present. Bows all over my outfit, I pranced around the house like Rudolph—that is, if the misfit reindeer was a beer pong rock star. Gutted over the loss of a three-year-relationship, I had decided to venture out of my home after a month of being a recluse. Mentally, I was more of a mourning Bambi than a festive Rudolph, but, either way, I was there.

Going to that party should have been an accomplishment for me, but turned into a nightmare. As people chewed on Tostitos chips and Christmas tree-shaped cookies, my 5’1 body decided to try whiskey, straight...and cups of it. I was drunk.

A twenty-something guy approached me by playfully grabbing a handful of my butt. Upset, I confronted him, grabbing his bottom with a vengeance. But soon I was giving into his advances and flirting back. I had only kissed two guys in my life, and was feeling a little reckless and curious. I wanted to make-out with this stranger in a bathroom. Instead he led me to a bedroom. Pitch-black was all I saw as he kissed me and laid me on his bed.

I was scared but also intoxicated—I couldn’t tell what was real anymore. Too afraid to say no, I allowed the guy to do whatever he wanted to me. I only remember a few seconds when his condom came off. Too drunk to properly consent, I was taken advantage of, and I have never been the same since.

In the months that followed, I was so afraid that my assailant gave me a disease that I developed something far worse than an STD: severe anxiety.

I couldn’t stop obsessively checking my lady parts in the mirror.

I vividly remember throwing up from anxiety on Christmas Eve as The Nightmare Before Christmas echoed from the living room. I had to wait an entire month before STD testing would produce accurate results, and the thought of having an infection literally made me sick to my stomach. Never before had my thoughts been so powerful that they made me physically ill. I was freaking out. I couldn’t stop obsessively checking my lady parts in the mirror, fearful that an alien bump or sore would blossom like a corpse flower.

It didn’t take long for me to realize that I wasn’t myself anymore. I became so obsessed with being “clean” that I lost my identity. Like Spiderman post-radioactive spider bite, I changed overnight. Except I had become something dark and twisty like Venom instead of hot and heroic like Peter Parker. What I became was an STD hypochondriac.

One cause for hypochondria is sexual abuse. My experience, and the anxiety that followed, though awful, wasn’t unique. In fact, the Rape Abuse and Incest National Network (RAINN) lists a number of after-effects that sexual assault survivors might experience including—but not limited to—post-traumatic stress disorder, depression, substance abuse, eating disorders, and anxiety.

“Common reactions to sexual assault include feeling like you can’t feel safe again, feeling ashamed, low esteem for self or others, feeling scared, and wondering if your life can ever be the same,” says licensed clinical psychologist Elizabeth Ramquist, Ph.D., an associate adjunct professor at the Chicago School of Professional Psychology, who specializes in trauma. “It might be difficult to sleep, trust, and feel like you have control again. You might experience difficulty with intimacy.”

I forked over $850 for STD testing in the span of just a few months.

In total, I forked over $850 for STD testing in the span of just a few months. My gynecologist grew exasperated with me. Any time she saw my name on the schedule she knew exactly why I was at her office—again. Despite consistently negative results, I repeatedly insisted on getting re-tested for every STD, especially after sleeping with someone new. It’s embarrassing to confess, but I actually had the STD lab codes memorized.

For months, I scoured health websites, and constantly Google image–searched STDs. I even went as far as to research STD support groups, just in case. Instead of binging on Netflix like everyone else, I studied sores on my computer screen. I was exhausting to be around: I would cry and compulsively text my friends asking them whether or not they thought I was clean. It’s a mystery they’re still around.

I still experience extreme anxiety after having sex with someone new—even safe sex. Ramquist explains that “in sexual acts, there is extreme vulnerability. To have trauma in such a vulnerable state, and to then put yourself back in that vulnerable state... it’s no wonder your newfound anxiety is triggered,” she says. “Once you’ve been traumatized, your experience of your world, and of life, changes.”

Ramquist was right, my world has changed. It’s tilted on its axis, and because of one night my life will never be the same. However, after years of coming to terms with what happened at that Christmas party, I have learned to take ownership and control of my anxious thoughts. I get tested only based on screening recommendations now—every 6 months to a year—and always use condoms. After talking to Ramquist, and determining the root of my anxiety, I rarely worry the way I used to. I’ve learned to communicate with my partners, so that they understand where I’m coming from when I ask them to get tested, or repeatedly ask them if they’re “clean.” My sense of safety, control, trust, and views on sex, might be a little different now, but I feel confident that I'm healthy—without needing a doctor to tell me so. 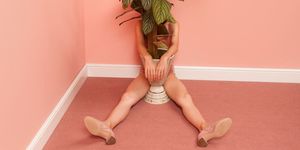 How an STD Landed Me on Welfare
Everything You Need to Know About HPV
Advertisement - Continue Reading Below
More From Health & Fitness
How to Build a Mini Gym at Home
Can't Find a Good Online Workout Class? We Gotchu
Advertisement - Continue Reading Below
What It's Like to Be a Doctor Fighting Coronavirus
The Best Workout Apps for Women Who Want Results
LVMH Perfume Factories to Produce Hand Sanitizer
Why Social Distancing Is So Important Right Now
I Tested Positive For the Coronavirus
What Staying Awake for 36 Hours Does to Your Face
The Mental Health Apps Professionals Recommend
How to Be More Spiritual in 2020