During an episode of the Goop podcast, Gwyneth Paltrow candidly opened up about her experience with something that hits close to home for a lot of women: postnatal depression, also commonly referred to as postpartum depression. 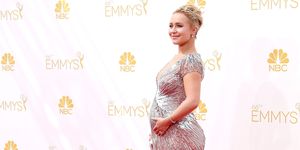 "I think [it] was really shocking to me because I never thought that I would be a person who got postnatal depression,” Paltrow said.

Us Weekly reported that Paltrow and her mom, Blythe Danner, spoke in an episode titled, "Gwyneth x Blythe: On Mothers and Daughters," about Gwyneth's two very different experiences after giving birth.

“I was so euphoric when Apple was born, and I assumed it would happen with Mosey and it just…it took a while. I really went into a dark place," she continued.

Happy birthday, my son. You are the sweetest, most brilliant young man I’ve ever met. You broke the mold 12 years ago today when you came into the world. #Iwasbornthedayyouwereborn

Paltrow has two children Apple, 13, and Moses, 12, with her ex-husband, Chris Martin. The Coldplay singer was the first to suggest that Paltrow might be experiencing symptoms of postpartum depression which include a loss in pleasure of the things that you enjoy, racing thoughts, excessive irritability, and feeling guilty or worthless, among many others.

According to the American Psychology Association, one in seven women experience postpartum depression. Not all women experience the same kind of postnatal depression—in some cases, the symptoms are more severe, leading a woman to be hospitalized. Paltrow said this wasn't the case for her, and in 2015, she told Entertainment Weekly she wished people could not feel ashamed.

"It’s a very debilitating thing, and I think there’s so much shame around it and there shouldn’t be," said Paltrow—and she's right about that.