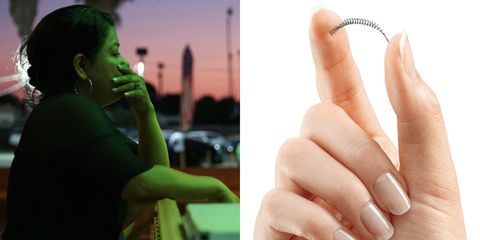 Years after the first reports of hazardous effects of birth control device Essure—and days before a Netflix documentary about it drops—manufacturer Bayer announced it will stop selling the controversial implant. The company framed its decision as based on poor sales, but the timing is hard to ignore: The Bleeding Edge, a documentary about medical devices gone awry that uses Essure as a prime example, drops on July 27. Essure was pulled July 20.

"We continue to stand behind the product's safety and efficacy," Bayer said in a statement. The company has maintained for years that Essure, a kind of metal coil that is implanted in the Fallopian tubes to block sperm, is safe, despite facing roughly 16,000 lawsuits from women who say they suffered ill effects after using it, including organ perforation, chronic and excessive pain, and unintended pregnancies. Yet Essure was discontinued due to a "business decision," the company said, citing "a decline in sales."

Meanwhile, Friday marks the launch of The Bleeding Edge, a Netflix documentary from the creators of The Hunting Ground. The Hollywood Reporter describes it as "a terrifying eye-opener," and Indiewire writes that it "stands a good chance at enlightening more people who have been (or might be) hoodwinked." The documentary isn't just about Essure—it focuses on a handful of medical devices that have caused major complications, including "vagical mesh" and hip replacements—but Essure is framed as a banner example of good intentions gone haywire.

When it comes to Essure, Bayer has suffered a particularly nasty year. Essure has been pulled or withdrawn from every country where it had been offered outside of the United States—Canada, the U.K., the Netherlands, you name it—and in April, the FDA announced it would be restricting sales of Essure to ensure that all women who consider it are fully aware of the risks. (Restricting sales, in this case, means only selling the device to facilities that agreed to review a set checklist with doctors and patients.) That said: "The FDA continues to believe that the benefits of the device outweigh its risks," the statement noted.

Once billed as the only permanent contraceptive device on the market, Essure has since become a buzzword for unexpected complications. On Facebook and other social media sites, there exists a growing community of Essure-affected women who congregate to share their experiences. Between 2002 and 2017, close to 30,000 women filed formal reports of "adverse effects" with the FDA after using Essure.

You can stream The Bleeding Edge on Netflix from July 27.