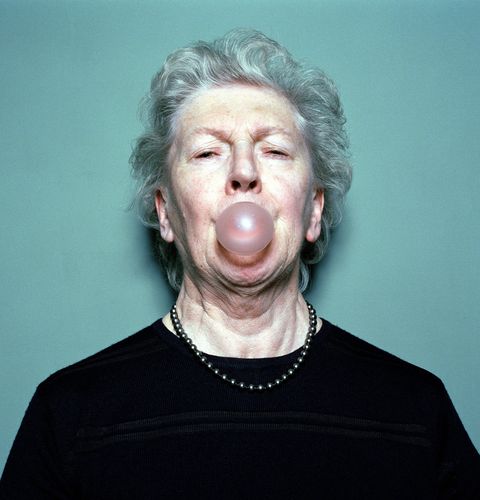 What's the secret to living a long and happy life? Well, it depends on who you ask. From close relationships (#SingleLadies) to eating habits (it's all about that porridge, y'all), we're taking a look at the best ways to keep rackin' up the years, courtesy of the oldest living people in the world. (Because who else would you take advice from?)

Unapologetically-cranky Flossie Dickey of Spokane, Washington has no time for your nonsense. Upon being asked what her secret is to living so damn long, she got right to the point. "I don't know, I don't fight it. I live it," she explained, perfectly stone-faced. It's worth noting that her favorite activity is napping, which only adds to the fact that Dickey is all of us. See further proof below:

The New Jersey resident, who has no children, credits her old age to three cans of Miller High Life and a shot of Johnnie Walker a day. Yes, that's right. (Though it has to be said, she drinks a little less now that her appetite has diminished...) Miller High Life—the champagne of beers, and apparently the key to immortality.

The 115-year-old Italian credits her long life to raw eggs and no men. Seriously. The oldest person in Europe has been eating raw eggs since her teens after her doctor recommended them to counter anemia. (She used to eat three a day, though now she's cut back to two). After an unhappy marriage that ended in 1938, Morano said she had plenty of suitors but never wished to marry again. "I didn't want to be dominated by anyone," she told the New York Times. Go on, girl.

The 109-year-old woman is the oldest in Scotland, and her advice for staying alive for so long is shockingly similar to Morano's: staying single and eating the same thing for many years. "My secret to a long life has been staying away from men. They're just more trouble than they're worth," she told the Daily Mail. "I also made sure that I got plenty of exercise, eat a nice warm bowl of porridge every morning and have never gotten married." Noted, Gallan.

The brand-loyal Texan is a relative youngin at 104, which might explain the spitfire sound byte she gave about her three-a-day Dr. Pepper habit. "Every doctor that sees me says they'll kill you, but they die and I don't. So there must be a mistake somewhere," shetold Fox 8.

Okawa was the oldest living person in the world (RIP), so we're definitely taking notes. The secret to her longevity? Sushi, relaxing, and eight hours of sleep a night.

Although no longer with us, Mrs. Weaver of Arkansas went strong until 116. For Weaver, it was about how you interact with others that keeps you young: "Kindness [is the secret]," she told Time. "Treat people right and be nice to other people the way you want them to be nice to you."

What's the secret to living to 115? Bacon and no children. According to Time, Jones eats bacon every morning, and never had children—but saved her salary to pay for her nieces to go to college.

Known as "Aunt V," this Jamaican woman cites not eating three specific things as key to her old age. "Really and truly, when people ask me [what I] eat and drink to live so long, I say to them that I eat everything, except pork and chicken, and I don't drink rum," Mosse-Brown told The Gleaner. There you have it.

According to Florence, you may already be on the path to living to 100. She credits drinking wine and not taking "any bologna" as the key to extending your life. "I like my wine. Don't take it away from me," she told Cosmo. Same.