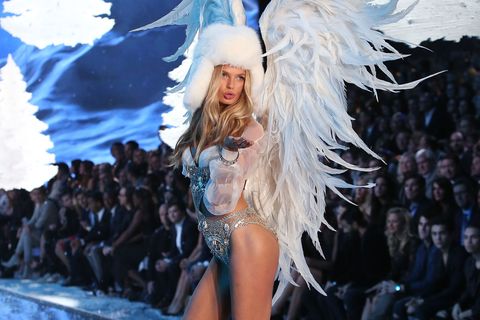 America's long national nightmare has just begun a new chapter, but we've still got a beacon of hope: holding up our end of the social contract, whatever that means to you, and the Victoria's Secret Fashion Show, which is set to walk in Paris later this month.

As usual, when this parade of the impossibly, professionally in-shape is televised approximately a month from now, we as a country come together with dairy and corn products pumped full of carcinogens to laugh at the costumes and wonder what it's like having a low enough percentage of body fat that you can see every aspect of the underlying musculature. The latter is how terms like "thighbrow" (the creases that appear along the pelvis when seated) and "ab crack" (a line running down the center of the stomach) have entered our lexicon and collective consciousness—as will "hip dent," should this introduction serve its purpose.

ready to gear up! It's black sunday 💀☠️ #raidernation 🏈

Meaning "the indentation where the leg meets its socket," the HD is rare-ish, even amongst other elusive identifiers of hyper-fitness—most lingerie models may have valleys dividing their bellies in half, but not all of them have hip dents. And that's what makes it great—its exclusivity even amongst the elite, which kind of makes it more democratic in a way, doesn't it? Because in a culture that fetishes gaps and hollows and is prone to judging itself by narrow parameters, who's to say an objectively beautiful body with one characteristic but not another is any less beautiful?

Chelsea Peng I'm Chelsea Peng, the assistant editor at MarieClaire.com.
Advertisement - Continue Reading Below
More From Health & Fitness
IVF On Hold
How to Donate Money for COVID-19 Medical Supplies
Advertisement - Continue Reading Below
One Nurse’s Week on the Coronavirus Frontlines
How to Have Healthy Convos Around Climate Change
How to Build a Mini Gym at Home
Can't Find a Good Online Workout Class? We Gotchu
What It's Like to Be a Doctor Fighting Coronavirus
The Best Workout Apps for Women Who Want Results
LVMH Perfume Factories to Produce Hand Sanitizer
Why Social Distancing Is So Important Right Now