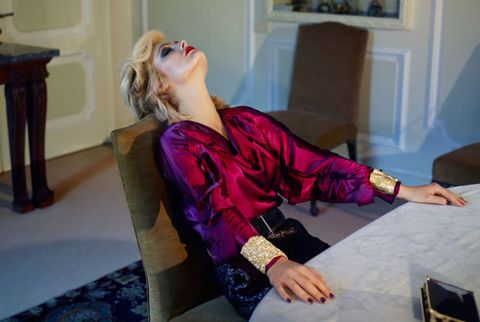 One morning in the spring of 2007, I left my apartment near Fenway Park and climbed into my car. I was a first-year student at Boston College Law School, headed for the library to study for exams. But as I made the 15-minute drive, sleepiness descended over me. I felt a weight in my skull, my entire body ached, and a burning sensation at the back of my eyes had me fighting to keep them open. The familiar landmarks along the Mass Turnpike were blurry. I slapped myself in the face and rolled down the windows, but I couldn't stay alert. Once or twice, my eyes even fluttered closed.

Half an hour later, I woke up in the school library parking lot. I didn't remember arriving, but there I was, my car engine on, seatback reclined. Incredulous, I mentally reviewed my morning: I'd eaten a big breakfast and had coffee just 45 minutes earlier, and I'd gotten a full nine hours' sleep the night before. What is going on? I wondered, terrified.

Two years earlier, I'd graduated from Brown. As an art history major taking courses in dark rooms, I constantly fell asleep. By junior year, I was retreating to the bathroom once a class, splashing water on my face and doing jumping jacks to wake up. But I had an excuse: I was captain of the varsity squash team, and practice started at 7 a.m. Fatigue never hit when I was out at dinner or a bar, so I wrote off my daytime dozing to my early practices.

I graduated in 2005 and took a job as a file clerk while applying to law school. My sleepiness continued, and then that spring, I started feeling muscle weakness when I laughed. One day, I was joking with my roommate when my knees buckled, as if someone had poked them. The sensation lasted a few seconds, and I ignored it. But as summer began, it was happening every few weeks. I asked around; no one had heard of anything like it.

I started BC Law in September 2006, and at a routine checkup that fall, I was worried enough to tell the doctor. I had always found excuses for my tiredness, but my muscle weakness was harder to ignore, and WebMD hadn't yielded answers. The doctor was stumped, and when classes began, I wondered whether law school was for me, after all. My first-year grades put me in the bottom half of my class.

When I started dating a cute fellow student that spring, my symptoms even invaded our sex life. We'd be kissing, and just as things got heated, my neck would give out, my head falling back like a rag doll's. I knew it was related to the weakness in my knees — the tingling feeling was the same — but I had no idea why it was happening. I was depressed, gaining weight, and I'd never felt so out of control: Even getting eight to 10 hours of sleep a night, I couldn't stay awake in class. My brother had recently been diagnosed with multiple sclerosis, and one of my uncles had died of Lou Gehrig's disease, so my parents and I figured my problem might be neurological. That scared me enough to want to get to the bottom of it once and for all, and I started seeing doctors. The breakthrough came when I visited a sports physician that July for (unrelated) tendinitis in my knees.

"Do your knees ever give out on you?" she asked. I mentioned the buckling when I laughed. "I've heard of that," she said, writing cataplexy down on a piece of paper.

I went home and Googled it. Cataplexy — a loss of muscle tone that comes with laughter, annoyance, and sexual desire — was a condition found in about 40 percent of narcoleptics. Narcolepsy? I knew the disorder had something to do with sleep, but as I read more, the condition described me perfectly: sleepiness, muscle weakness, even the vivid dreams that I sometimes couldn't tell from reality — all were symptoms. Alone in my apartment, I wanted to scream with relief. It was like someone had shown me a movie of the past few years of my life. But I also felt like I'd left the bathroom with toilet paper trailing from my foot. I was scared and embarrassed that I'd never known I had this. I sent my dad a Wikipedia link about narcolepsy, then shut down my computer. After hours reading as much as I could online, I still didn't know what impact this condition would have on my future.

Later that month, I visited a narcolepsy specialist, who prescribed a daytime stimulant for me so I wouldn't be sleepy while driving. To confirm the diagnosis, I had to do an overnight sleep study, scheduled for September 2, more than a month away. I was frustrated — I still didn't realize this was a chronic illness. I just wanted it to go away before school started again.

The results of the study came back two weeks after my appointment: My neurologist said I had a classic case of narcolepsy. In a way, it felt great. For so long I'd been accused of being rude or lazy when I fell asleep during family holidays or in class. Now I knew none of it was within my control. But getting diagnosed wasn't an immediate fix — there's no cure for narcolepsy. So I take two kinds of medication — Xyrem, a sedative, and Ritalin, a stimulant — to help me manage my symptoms.

Researchers think narcolepsy is an autoimmune neurological disorder. People with narcolepsy lack a brain chemical that controls sleep patterns, and when we drift off, we go directly into REM sleep, which blurs the boundaries between dreaming and consciousness. (Non-narcoleptics cycle through four other sleep stages before reaching REM sleep 60 to 90 minutes after dozing off.) The cataplexy isn't fainting or epilepsy but an aspect of dream sleep, paralysis, happening while I'm completely conscious, probably due to brain cells that have somehow been damaged. When doctors hear my story, they say I'm lucky I caught it "early." The condition can take 10 to 15 years to diagnose, even though 1 in 2,000 Americans has narcolepsy — about as many as have MS.

Once I had more information about what was happening to me and why, the last two years of law school were easier. But ultimately, I decided not to pursue a traditional career at a law firm. Narcolepsy changed how I value my time. It affects every decision I make, from when and what I eat and drink (meals have to be planned around my medications) to my social life. I still feel cataplexy every day, but it's minor. And since I've plateaued, I shouldn't get any worse. I still sometimes feel sleepy during the day, despite the stimulants, but a quick nap fixes that, and I try to get eight or nine hours of sleep each night.

The spring after I graduated from law school, I ran the Boston Marathon and raised $6,000 for narcolepsy research. Now I'm living in Washington, D.C., writing a memoir, and advocating to help kids with narcolepsy succeed in school. At one point, as a law student, I remember thinking that narcolepsy was the worst thing that had ever happened to me. I wanted to beat it, but you can't really do that. So I decided I was going to turn it on its head and make narcolepsy the best thing that ever happened to me. I had no idea what that meant at the time, but I think I'm getting closer.