The mayor of San Juan, Puerto Rico, took on the feminist rallying cry of the resistance in a sly rebuke of the president on Wednesday: by proudly wearing a "NASTY" shirt in a television interview.

Carmen Yulín Cruz wore the shirt as she criticized the federal government's response to Hurricane Maria, which ravaged the island when it struck two weeks ago. Half of the island still doesn't have access to drinking water, and 95 percent of households don't have electricity. Only 14 hospitals have power, while 51 are still in need of generators. 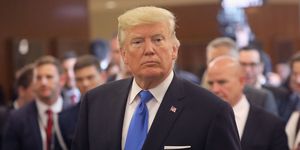 “When someone is bothered by someone claiming lack of drinking water, lack of medicine for the sick and lack of food for the hungry, that person has problems too deep to be explained in an interview,” Cruz said of Trump in the interview, on Univision, a Spanish language channel.

Cruz initially spoke out about the Trump administration's response to the disaster last week, urging officials to survey the extensive damage themselves. Instead, the president took to Twitter to attack her.

When he levied the same insult at Hillary Clinton during the final presidential debate last year, it immediately became a symbol of anti-Trump feminists across the country, inspiring a host of "Nasty Woman" shirts. 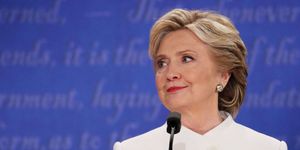 On Tuesday, Trump visited the island to assess the damage of storm, suggesting that Maria was not a "real catastrophe" like Hurricane Katrina, and making a joke about the cost of the recovery. When Cruz met with him briefly, she told him that the disaster relief was "all about saving lives. It’s not about politics."

In the interview Wednesday, Cruz said that she intentionally wore the shirt to hit back at Trump. "What is really nasty is that anyone would turn their back on the Puerto Rican people."

Rebecca Nelson Rebecca Nelson is a magazine writer in New York.
This content is created and maintained by a third party, and imported onto this page to help users provide their email addresses. You may be able to find more information about this and similar content at piano.io
Advertisement - Continue Reading Below
More From Politics
What Is Mutual Aid? For One, Not a Trend
How to Help Texans During the Winter Storm Crisis
Advertisement - Continue Reading Below
Hate Crimes Against Asian Americans Are Rising
Anti-Trans Bills Are in the Works Across the U.S.
Vanishing Act
The Women Who Took on ISIS—and Won
Yes, Trans People Belong in Sports
I’m a Parkland Survivor. Rep Greene Must Resign
Why Indian Farmers Have Been Protesting for Months
AOC Opens Up About Her Trauma