Axios’ Evan Ryan, a former staffer for Vice President Joe Biden, and Ashley O’Connor, of Strategic Partners & Media, an adviser on both of President George W. Bush’s campaigns, offer a play-by-play on how to catch the public’s eye.

“First and foremost, know why you are running because voters (and reporters) can figure out really quickly if you are just reciting a canned message from a consultant," says Ryan. "Once you’ve announced, sit down with a reporter and explain your message and what has motivated you to run.”

“Have a search campaign (buying key-words through Google) to direct people to your website,” O’Connor explains. “From there, you get them engaged. Get their e-mail address, ask them to like your Facebook page, to follow you on Twitter. The more you can build a relationship directly, the less money you spend later to reach that person.” 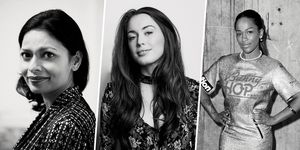 “Ask your friends and neighbors to host gatherings in their living room, and sit down with people in your community,” Ryan suggests.

“Authenticity is key to campaign ads,” O’Connor says. “If you’re not comfortable in a suit giving a speech, don’t make an ad that’s you giving a speech in a suit. Voters are pretty sophisticated, and you will not get out of the gate if they think you are not sincere.”

“People aren’t gravitating toward negativity,” Ryan notes. “Have answers, solutions, and new ideas. That said, politics can be a rough sport. Be able to defend your position and show strength!”

Kayla Webley Adler Deputy Editor Kayla Webley Adler is the Deputy Editor of ELLE magazine.
Jen Ortiz Deputy Editor, Cosmopolitan As deputy editor, Jen oversees Cosmopolitan's daily digital editorial operations, editing and writing features, essays, news, and other content, in addition to editing the magazine's cover stories, astrology pages, and more.
This content is created and maintained by a third party, and imported onto this page to help users provide their email addresses. You may be able to find more information about this and similar content at piano.io
Advertisement - Continue Reading Below
More From The Everything Guide to Running for Office
Nine Congresswomen on Why They Almost Didn't Run
The Women of Congress on Why They Ran for Office
Advertisement - Continue Reading Below
Nine Congresswomen on Why Women Should Run
The Reality of Life In Congress
Advice from the Women of Congress
How to Raise Money for Your Political Campaign
How to Conquer Trolls During Your Campaign
Social Media Tips for the Campaign Trail
How to Stay Sane on the Campaign Trail
How to Deal with Press on the Campaign Trail