Karen Dunn is a debate pro. The partner at Boies Schiller Flexner Law Firm has had clients ranging from President Obama to Democratic presidential nominee Hillary Clinton. (Yes, even they need help too). If you find yourself worrying about how to win those crucial arguments, ahead Dunn shares her rules for taking the stage.

“When you’re practicing, sitting at the table reading from notes is not going to be as effective as standing up behind a podium with another person behind a podium, feeling what that’s like and developing your instincts. Video yourself practicing. It can feel very painful, because you have to confront all the things that you’re not doing well, but this exercise helps enormously.“

“Find a surrogate opponent who will do as much as possible during practice. They need to be able to make the exact arguments that the candidate is going to hear.” 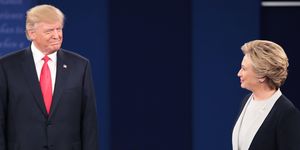 “When you first take the stage, write down three points or things to do that you want to remember. And don’t be afraid to take notes: It’s a sign of respect for the process, and that you’re listening to the other person and getting ready to respond.”

“You can’t hold back. Because if you’re not punching, you’re getting punched. You’ve got to play to win.”

Kayla Webley Adler Features Director Kayla Webley Adler is Features Director at Marie Claire magazine, where she edits the monthly print news and politics section (called News Feed) and writes narrative features, often at the intersection of women’s health and politics.
Jen Ortiz Deputy Editor, Cosmopolitan As deputy editor, Jen helps oversee Cosmopolitan's daily digital editorial operations, editing and contributing features, profiles, essays, news, and more.
Advertisement - Continue Reading Below
More From The Everything Guide to Running for Office
Nine Congresswomen on Why They Almost Didn't Run
How to Build Buzz for Your Campaign
Advertisement - Continue Reading Below
How to Stay Sane on the Campaign Trail
Social Media Tips for the Campaign Trail
How to Conquer Trolls During Your Campaign
How to Raise Money for Your Political Campaign
Advice from the Women of Congress
The Reality of Life In Congress
Nine Congresswomen on Why Women Should Run
The Women of Congress on Why They Ran for Office