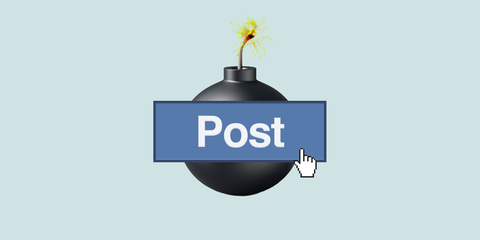 Last Saturday morning, I woke up at my in-laws' house in California at 6:30am. I paced the quiet, chinoiserie-studded rooms before settling in for my first pee of the morning—and like many of us, I used that time to check Facebook. I scrolled through posts from well-meaning people regarding the proposed defunding of Planned Parenthood, friend after friend defending the organization by talking about the various healthcare services they had obtained there that had nothing to do with sex or pregnancy, much less abortion. Deeply sick of not only the GOP's mercenary attacks on my rights but the mealymouthed, apologetic tone of my allies, I tapped out the following status:

I was increasingly pissed at the compromised rhetoric my friends were using to defend the organization. Of course Planned Parenthood provides a wide spectrum of women's (and men's) wellness services. Of course we have all gone to Planned Parenthood for pap smears and cancer screenings and STI tests and all manner of non-abortion health services. Of course the Hyde Amendment prevents abortions from being federally funded.

But they were making Planned Parenthood sound like any other health clinic, which it is not. It very importantly provides sexual health-related services, including abortion, to women—especially low-income and uninsured women. Who have sex. And don't want to be pregnant. And this is a good thing.

Hillary Clinton is the first example I can recall of a well-meaning person muddying the waters of this conversation, when she said that abortion should be "safe, legal, and rare" back in 1992. We don't say that any other medical procedure should be rare; we say that it should happen as often as is needed to keep people healthy. In 2012, Sandra Fluke's speech—to Democrats—regarding insurance coverage of contraceptives was heavy on the arguments about how they help ovarian cysts and endometriosis, and light on the sex talk. She was still, of course, called a slut and a prostitute by Rush Limbaugh, because he is wonderful.

Yes, these medications have many uses—hell, I'm sure the Pill could be used as an earring back in a pinch, and an IUD could replace a lost zipper pull—but their main purpose is to prevent pregnancy in women. Who have sex. And don't want to be pregnant. And this is a good thing.

Meanwhile the GOP is taking that "rare" and running with it, making sure it's not just a concessionary political talking point, but the rule. Laws are being passed in several states restricting not only if and how a woman obtains an abortion, but *why*. We are on a very slippery slope sliding right into the hands of people who treat The Handmaid's Tale like an instruction manual. And this is not a good thing.

I had in fact hit the limit for friend requests, which I now know is one thousand.

So anyway, after I posted my "rant," my family and I headed out for a wedding up in the redwood forest of northern California. I looked at my phone right before we left, and saw that it had a few likes and shares and some heartening comments. I stopped looking, and tried to focus on analog life. We stayed for hours, dancing to great jazz and inhaling canapés. When we emerged and rejoined the grid, I checked my phone.

I thought it was broken. I thought there was some kind of glitch.  My phone glowed hot in my hand. I had hundreds of friend requests. I had in fact hit the limit for friend requests, which I now know is one thousand. The post itself? Over 20,000 likes. I was suddenly the focus of the vast and terrifying panoply of human digital behavior.

Again, I thought this must be some kind of mistake, some weird algorithmic shart. Then I started reading the comments and messages, which were overwhelming.

The word "preach" was thrown around, along with those praising emoji hands. People said "finally!" and called me their "shero." I felt pretty damn good.

But mixed in with the encouraging responses were people calling me a whore, a murderer. There was a holy trinity of the c-word: stupid c-nt, f-cking c-nt, insane c-nt. Many people cordially invited me to end my own life. A group called Chicks on the Right called me a godless monster—right underneath a post celebrating the recent deaths of hundreds of Muslims in the stampede at Mecca. Pro-lifers!

A lot of people sent me violent and graphic messages telling me to abort myself (the logic here mystifies me), then immediately blocked me so that I couldn't respond or access their profiles. I guess that's a popular tactic. I would never have thought of it, because I never send hateful, violent messages to people simply because I disagree with them, and then so fear their response that I scurry away and hide. The other thing I learned is that some people will send you a hateful message, hover over their screen until the moment they get a read receipt, and then quickly delete it, so that you cannot report it to Facebook or the police.

(Sidenote: I do find it ironic that all these time-consuming hate-mail strategies, not to mention the constant screaming at women outside clinics, are practiced so heavily by the anti-abortion crowd in particular, considering that they are so purportedly concerned with preventing the waste of lives.)

A group called Chicks on the Right called me a godless monster—right underneath a post celebrating the recent deaths of hundreds of Muslims in the stampede at Mecca.

"How dare you use the word Nazi—you are the real Nazi, abortion is the American Holicaust! [sic]" Okay, random hateful person, you have a fair point. I do regret using the word Nazi, if only because it's uncreative. I'd love to go back and change it to "stormtroopers" or "hatebarons." But, as I now know, there are no takesies backsies on the internet.

Also, if you're so concerned about genocide, surely you are appalled by the very real threat of genocide happening right this second in Syria and Iraq, and have appealed to our president to provide harbor for even more refugees than the 10,000 he has promised? No?

I have one other regret, by the way. There were women who said that they agreed with the post, but that their abortions had been painful, tragic, or both, and that they found my statement to be insensitive to them. I could have been a bit clearer about this. I meant that the fact of abortion, the existence of it, is not itself tragic or painful—it just is. I certainly did not mean to invalidate anyone's personal experience ; I was simply trying to refute the theatrical hand-wringing that so many liberal politicians engage in when it comes to discussing abortion as a fact.

Abortion is the only medical procedure in which the circumstances and behavior of the patient are used as excuses to stigmatize and deny their treatment. A lot of the pain and tragedy abortion patients feel is owing to that stigma, and the guilt they share as a result. And I'm sick of it.  So I posted about it. And now it's out there.

So here I am now, a and a half week later. I have a couple thousand new followers, a bunch of new friends, and many new enemies. My post has been shared by politicians and women's rights groups, has been seen by hundreds of thousands of people, and has been made into a meme. It's on Facebook and Twitter and Instagram and probably some other social media apps I'm too old to even know about.

To those who continue to harass me, at least it keeps your hands busy. To those who held me up with those rows and rows of emoji hands, thanks. I'm going to keep preaching about abortion, about all women's rights, and about every other damn thing I am passionate about. I just hope my posts about people clipping their nails on the subway, or not covering their mouths when they sneeze, get this many eyeballs. If we're gonna control what other people do with their bodies, can we please start there?