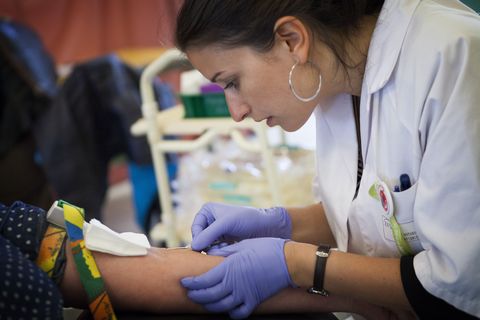 The Food and Drug Administration lifted its lifetime ban on blood donations from gay and bisexual men, reversing a policy that's stood for 32 years, according to the Associated Press.

There's a catch: the new policy requires a year of abstinence from donors.

The FDA's move comes a year after the government agency said it planned to review the policy, which has been in place since 1983, when the AIDS epidemic was first gaining widespread attention in America. The aim of the ban was to prevent the transmission of HIV and AIDS through the blood supply. At the time, there was little information available about the disease, nor a quick way to learn whether somebody had it, according to The New York Times.

Gay rights advocates, however, have said the ban amounted to discrimination. "The existing policy is archaic and discriminatory because it falsely assumes that all gay men are HIV-positive regardless of their sexual behavior," Martin Algaze, spokesman for Gay Men's Health Crisis, told ABC News earlier this year. "At the same time, it allows heterosexuals to donate blood even if they have participated in risky sexual or drug-use behavior."

The FDA allows heterosexual women who've had numerous AIDS-infected partners to give blood after waiting a year, ABC News pointed out.