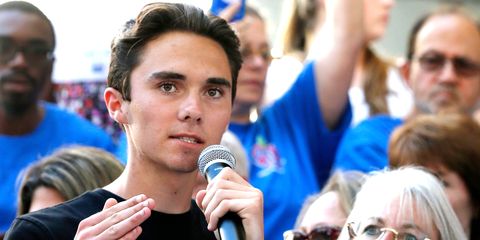 Following the devastating shooting at Marjory Stoneman Douglas High School last month, in which 17 people were killed, a group of remarkable students are continuing their campaign to end gun violence for good.

David Hogg, a student at Douglas, discussed the challenges facing the #NeverAgain movement, in particular noting the racial disparity that has to be overcome, in order for true change to happen when it comes to reporting on, and ending, gun violence.

In a live Q & A on Twitter this week, Hogg said, “There is a lot of racial disparity in the way that this [shooting] is covered." He is especially concerned that white communities are given more extensive coverage in the media when it comes to gun violence.

"If this happened in a place of a lower socioeconomic status or... a black community, no matter how well those people spoke, I don’t think the media would cover it the same. We have to use our white privilege now to make sure that all of the people that have died as a result of [gun violence] and haven’t been covered the same can now be heard."

Parkland students have campaigned tirelessly, with Hogg's interview being the latest in a long line of important discussions they've forced upon public officials since the tragic shooting claimed 17 lives at their school.

Recently, following a shooting at Central Michigan University, activists including Emma González, Jaclyn Corin, and Sarah Chadwick, took to Twitter to show their support for gun reform, ensuring that the voices of survivors everywhere are heard.

Related Story
Parkland Students React to CMU Shooting
Amy Mackelden Amy Mackelden is a freelance writer, editor, and disability activist.
This content is created and maintained by a third party, and imported onto this page to help users provide their email addresses. You may be able to find more information about this and similar content at piano.io
Advertisement - Continue Reading Below
More From Politics
What Is Mutual Aid? For One, Not a Trend
How to Help Texans During the Winter Storm Crisis
Advertisement - Continue Reading Below
Hate Crimes Against Asian Americans Are Rising
Anti-Trans Bills Are in the Works Across the U.S.
Vanishing Act
The Women Who Took on ISIS—and Won
Yes, Trans People Belong in Sports
I’m a Parkland Survivor. Rep Greene Must Resign
Why Indian Farmers Have Been Protesting for Months
AOC Opens Up About Her Trauma