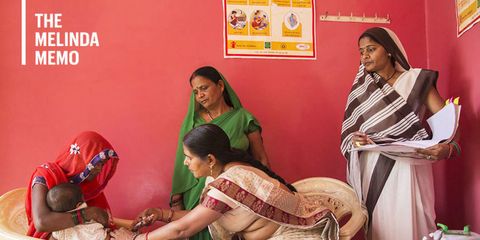 Courtesy of the Bill and Melinda Gates Foundation

In the 15 years since Bill and I started our foundation, I've spent a lot of time overseas in developing countries, meeting people, seeing their homes, hearing their stories, and learning about what their lives are like.

I just got back from India—my ninth trip there—where I visited with families in two rural villages, Kamrawa and Kola. We had long, candid conversations about everything from education to gender equality to contraceptives.

For many years, women in these villages have had no access to contraceptives, which means no options for deciding whether—or  even when—to get pregnant. But now, contraceptives are slowly becoming more prevalent. There's a new generation of young women in this part of the world who are finding that family planning tools are helping them take charge of their futures.

Here are some other takeaways from my trip:

1. Access to Contraceptives Is Empowering a New Generation of Women

Like most women I know, I have used contraceptives for many years. The decision about whether and when to get pregnant was a decision that Bill and I made together based on what was right for our family –and that's a Western privilege: Over 220 million women around the world don't have access to modern contraceptives.

For many years, that was the reality for women in Kamrawa. But now, they have many more places to turn to for family planning services and counseling—especially on the community's monthly "health and nutrition day." This new initiative is empowering a younger generation of women to make decisions for themselves.

When she was young, Anita didn't have access to modern contraceptives like the women in her village do today. There was no doctor she could visit to talk to about her options, nor a pharmacy where she could pick up a prescription. Instead, she got married when she was only 16 and started having children right away. The birth of her first child was quickly followed by the birth of four more. As a result, she worried constantly about whether she could afford to feed them and keep them in school.

Today, Anita loves spending time with her 6-month-old granddaughter, Neha, and is determined to give her every opportunity to live her best possible life. She says that she hopes Neha's mother—her daughter-in-law—will take advantage of the newfound contraceptive access and space out her pregnancies. In a society where mothers-in-law have traditionally encouraged their daughters-in-law to have big families, Anita's attitude is a sign of shifting cultural norms.

On average, Indian women spend about six hours a day on the everyday chores that keep households running–jobs like cleaning, caring for children, and preparing food, like the papad Anita is making in this photo. Men, on the other hand, typically spend less than an hour on these tasks. Anita told me that for long stretches of her life, her household work took up her whole day, leaving her no time to get a job outside the home or pursue any sort of education. As I wrote in our annual letter earlier this year, this inequity is one that many women around the world face.

4. Working Mothers Are on the Rise

Sushila has two kids, including 2-year-old Sakshi. She told me that she and her husband are using contraceptives because they want to wait until their finances are a little more secure to have more children. When her daughter starts school, Sushila is going back to her job as a teacher. Working mothers are rare in this community—so Sushila's decision is a visible step toward equality for the women who live there.

This year, more children around the world will live to see their fifth birthday than ever before—and vaccines are a key reason why. No baby likes getting a shot, but parents and health workers know that a vaccine can mean the difference between life or death. Archana knows how important her work is to her community: She told me that the responsibility she feels for the women and children she takes care of keeps her going through long workdays in the sweltering heat.

6. These Women Are Paving the Way Forward

All of these women told me they're just as ambitious for their daughters as they are for their sons. I can't wait to see what this next generation of young women grows up to accomplish.

Follow me on Instagram at @melindafrenchgates to see more snapshots from my travels and learn about my work advocating for women and girls.

Melinda Gates As co-chair of the foundation, Melinda Gates shapes and approves strategies, reviews results, and sets the overall direction of the organization.
This content is created and maintained by a third party, and imported onto this page to help users provide their email addresses. You may be able to find more information about this and similar content at piano.io
Advertisement - Continue Reading Below
More From Politics
Moving Forward: We Need Better, Not 'Normal'
Could This Be the Last Year of Roe v. Wade?
Advertisement - Continue Reading Below
Meet the Next Presidential Pets, Major and Champ
Who Is Jen Psaki, Biden's Press Secretary?
Bernie Sanders at the Inauguration Is a Whole Mood
The Inaugural Concert Was a Cheesy Balm
Read VP Kamala Harris's Inauguration Speech
No, There Is No Inaugural Ball This Year
Kamala Harris Is "Momala" to Two Stepchildren
Read Amanda Gorman's Moving Inauguration Poem