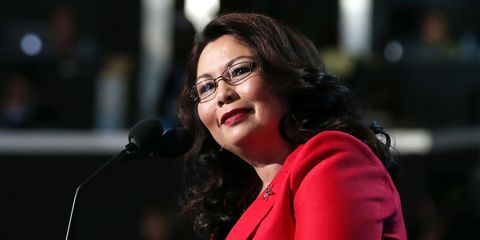 “We’re...so grateful for the love and support of our friends and family, as well as our wonderful medical teams for everything they’ve done to help us in our decades-long journey to complete our family,” she said in a statement.

She and her husband, Bryan Bowlsbey have another daughter, Abigail, who is 3 years old. According to the New York Times, Duckworth "was already one of 10 women who had given birth while serving in Congress, having had Abigail in November 2014 as a member of the House of Representatives."

A spokesperson said that Duckworth will be on maternity leave for 12 weeks, but available for any close votes. She announced her pregnancy in an interview with The Chicago-Sun Times, describing her struggle to conceive. Both of Duckworth's daughters were conceived through in vitro fertilization.

Since giving birth to her first daughter, she's made it a priority to introduce new bills that would help both parents. So far, none of them have been passed.

In her statement announcing Maile's birth, she said, “Parenthood isn’t just a women’s issue, it’s an economic issue and one that affects all parents—men and women alike."

Duckworth continued: "As tough as juggling the demands of motherhood and being a Senator can be, I’m hardly alone or unique as a working parent, and my children only make me more committed to doing my job and standing up for hardworking families everywhere."

Alex Warner
This content is created and maintained by a third party, and imported onto this page to help users provide their email addresses. You may be able to find more information about this and similar content at piano.io
Advertisement - Continue Reading Below
More From Politics
A Guide to Celebrity Presidential Endorsements
When Will We Know Who Won the Election?
Advertisement - Continue Reading Below
A Guide to How the Electoral College Works
Just 40 Celebrities Doing Their Civic Duty
How the 2020 Election Will Impact Dreamers Like Me
Should Felons Vote? Ask This Rep With a Record
Girl Scouts Delete Tweet About Supreme Court
How to Track Your Absentee Ballot This Year
How to Demand Justice for Walter Wallace Jr.
America Has a Dark History of Forced Sterilization