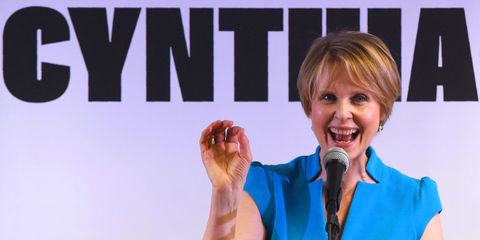 Proving that Cynthia Nixon doesn't give up easily, you can now buy new merchandise to support her campaign that features the hilarious slogan, "Unqualified Lesbian."

In an interview with The Post, former City Council speaker Christine Quinn defended Andrew Cuomo, and said of Nixon's run for governor, "Cynthia Nixon was opposed to having a qualified lesbian become mayor of New York City. Now she wants an unqualified lesbian to be the governor of New York. You have to be qualified and have experience."

But rather than taking this as the insult it was intended to be, Nixon has spun the offensive phrase into a positive. Much in the same way that "Nasty Woman" was co-opted by feminists and Clinton supporters everywhere, "Unqualified Lesbian" is fast becoming Nixon's calling card.

Maybe we will get a shirt soon too? pic.twitter.com/RPGSaecYTY

For now, Nixon's campaign is selling buttons with the phrase on, but the internet has already suggested that she needs to start making t-shirts. Clearly, there's a market for them, and Quinn's phrase has struck a chord with people everywhere. The blue and white buttons are available for $5 each.

The former Sex and the City star announced that she was running for governor of New York earlier in March, when she posted an emotive campaign video. Of her run, Nixon said:

"New York is my home. I've never lived anywhere else. When I grew up here, it was just my mom and me in a fifth-floor walk-up....We are now the most unequal state in the entire country with both incredible wealth and extreme poverty....I've never wanted to live anywhere else, but something has to change."

Nixon has already responded to Quinn's remarks, at her campaign launch, by saying, "Welcome, unqualified lesbians. And qualified ones, too."

Related Story
Cynthia Nixon Is Running for New York Governor
This content is created and maintained by a third party, and imported onto this page to help users provide their email addresses. You may be able to find more information about this and similar content at piano.io
Advertisement - Continue Reading Below
More From Culture
Dyland Arnold Is a Breakout Star in 'You' Season 3
'Virgin River' Season 4: Everything We Know
Advertisement - Continue Reading Below
Madi Prewett Shares Her Favorite Self-Care Books
'Only Murders' Is Getting a Season 2
Every 'Squid Game' Hint You Missed Along the Way
Meet the Cast of Netflix's 'Squid Game'
Listen to the Best New Love Songs of 2021 (So Far)
Shalita Grant Is Hilarious in 'You'
'Squid Game' Season 2: Everything We Know
Breaking Down the 'You' Season 3 Finale