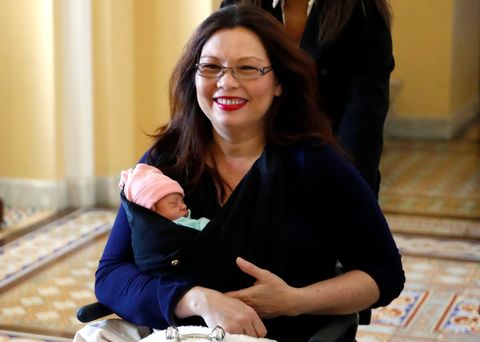 Tammy Duckworth, U.S. Senator from Illinois and war hero, rolled onto the Senate floor yesterday to great fanfare and countless news stories, becoming the first person ever to do so with an infant—her 10-day-old, pink hat-sporting daughter, Maile—snuggled against her chest. "It's about time," she declared on behalf, the New York Times suggested, of women everywhere.

Indeed, the time has come. It seems rather uncontroversial that a person should be able to bring their infant to work when necessary—and it's especially necessary when that workplace is the Senate floor. Senators are required to cast votes in person. This update to the Senate rules is a positive one.

It feels like there wasn’t enough stating the obvious: “That’s all new mothers get?”

But amidst anecdotes of Senator Chuck Schumer cooing and Florida Senator Marco Rubio joking that they’ve all witnessed plenty lawmakers acting like babies, it feels like there wasn’t enough stating the obvious: “That’s all new mothers get?” And asking the follow-up, “What’s next?”

It’s clear that Senator Amy Klobuchar, the lawmaker from Minnesota and senior Democrat on the Rules Committee, had to jump through plenty of hoops to get this rule change, and she and Senator Duckworth are to be commended. (Senators Duckworth and Klobacher did not respond to requests for comment.) But are Americans really expected to celebrate as a great victory for womankind the fact that a woman's only option for doing her job is to haul a 10-day-old baby to work? To get herself to the office while her own body is undoubtedly still recovering from delivery, simply to voice a simple yes or no?

Shouldn’t the real goal be something more empathetic to a new mom’s plight? How about for 12 weeks (to match the number of weeks mentioned in the Family Medical Leave Act) from the date of delivery, a new parent can vote via video call? My four-year-old can FaceTime his 64-year-old grandmother with no difficulty, so I’m confident the technology is not a hurdle.

Such a change would do in reality what Senators proclaimed this babies-on-the-Floor rule will do—make the Senate a welcoming workplace and a model for the rest of the country. And, even more, allowing virtual voting would show actual respect for new mothers in one of the few jobs where the person is truly indispensable. Only she can cast her vote. And if she doesn't, the only people who lose are her constituents.

“We don’t have empathy for a situation until we care about someone in that situation. Now all her colleagues will see this issue as they’ve never seen it before. What a fantastic opportunity,” says Amy Beacom, founder of the Center for Parental Leave Leadership, which helps lawyers and corporate staff and executives plan for parental leave. The Senate has an opportunity to be an inspiration for new parents everywhere, who struggle with how present (or not) to be during the first months after their children are born, she said.

Such a change would make the Senate a welcoming workplace and a model for the rest of the country.

That said, I’m no Josh Lyman, but I am certain this suggestion would leave lawmakers and Senate rules historians reaching for the smelling salts—voting in person is a cornerstone rule for floor votes, one not even deviated from if a lawmaker is ill or recovering from surgery. (Remember a bandaged John McCain arriving to dramatically give a thumbs down to the “skinny repeal” of Obamacare?) 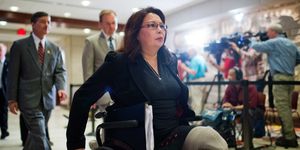 Tammy Duckworth Is The Hope You Need Right Now

But the time after a woman has a baby is very different from those things: One, it’s a predictable timetable that can be planned for. And two, the person is generally healthy; there aren’t questions of competency or worries that what's keeping her away is open to inappropriate coercion.

I can hear the naysayers now, asking—if we allow new moms to vote—how far are we from everyone voting remotely, spending all their time fundraising, binge-watching The Good Fight, and eyeing their phone for HQ time? Far! No one wants that. Fear of the unknown has never been a good reason not to implement a solution to a present problem that will occur more and more as the number of female lawmakers increases.

Tammy Duckworth's service to her country is astonishing, and frankly she seems like an all-around badass. We all applaud this step, but in truth, it's nothing but a baby one.

This content is created and maintained by a third party, and imported onto this page to help users provide their email addresses. You may be able to find more information about this and similar content at piano.io
Advertisement - Continue Reading Below
More From Politics
Grand New Party?
What Is Mutual Aid? For One, Not a Trend
Advertisement - Continue Reading Below
How to Help Texans During the Winter Storm Crisis
Hate Crimes Against Asian Americans Are Rising
Anti-Trans Bills Are in the Works Across the U.S.
Vanishing Act
The Women Who Took on ISIS—and Won
Yes, Trans People Belong in Sports
I’m a Parkland Survivor. Rep Greene Must Resign
Why Indian Farmers Have Been Protesting for Months