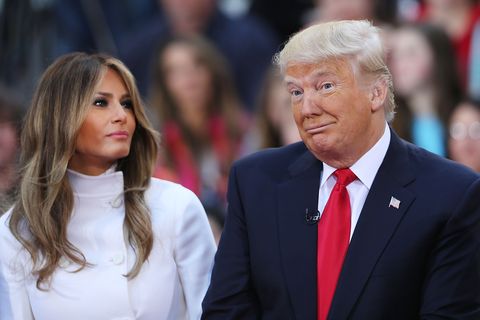 Donald Trump did a phone interview today with his favorite television show, Fox & Friends, and things got a little personal. Because today is his wife, Melania Trump's, birthday (a fact Trump brought up himself at the very start of the interview), the hosts politely asked what he got the first lady for the big day.

"Well, I better not get into that 'cause I may get in trouble. Maybe I didn't get her so much," Trump said with a laugh.

Don't forget the Fox & Friends birthday shoutout, Donald. Having your husband tell reporters that he purposely scheduled a 30-minute interview to coincide with your birthday? It's the priceless gift everyone woman dreams of.

The "fantastic job with France" bit refers to French President Emmanuel Macron and his wife, Brigitte's recent visit to Washington and the Trumps' first State dinner.

Melania, who turns 48 today, has made headlines multiple times in the past week. While welcoming Macron and his wife, Melania was caught on camera avoiding Donald Trump's attempts to hold her hand (yet again—because this has happened before).

“I know I’ve been an absentee dad and a horrible husband - including flagrant affairs while you were pregnant - but let’s just hold hands at this event...” pic.twitter.com/gLDCs40iCk

And last weekend, the internet went wild over a picture of Melania flashing former president Barack Obama a beaming smile at Barbara Bush's funeral in Houston. Twitter users joked that it was ironic that Melania appeared happier at a funeral with Obama than she has at more festive occasions with her own husband.

Melania looks happier at a funeral than she has in ages. Wouldn’t you too if you went from being with Donald every day to sitting next to Barack?
#barbarabushfuneral pic.twitter.com/JrnLY0MJyX

Kayleigh Roberts Contributor Kayleigh Roberts is the weekend editor at Marie Claire, covering celebrity and entertainment news, from actual royals like Kate Middleton and Meghan Markle to Hollywood royalty, like Katie Holmes and Chrissy Teigen.
Advertisement - Continue Reading Below
More From Politics
The Struggle to Get an Abortion During COVID-19
Bernie Sanders Has Dropped Out of the Race
Advertisement - Continue Reading Below
Marie Claire Wants You to Vote
The Ecowarriors Greenifying Big Tech
Who Is Andrew Cuomo's Ex-Wife Kerry Kennedy?
How Planned Parenthood Is Responding to COVID-19
British PM Boris Johnson Has Coronavirus
Fear Is a Virus
COVID-19 Exposes the Dangers of Gender Inequality
“I’m Homeless—How Can I Self-Quarantine?”