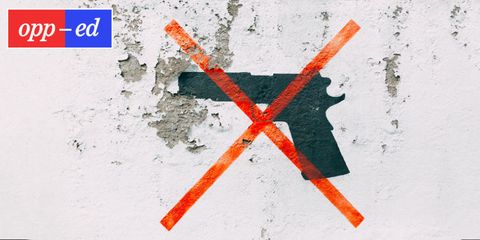 This week, the Supreme Court issued a hugely important, much-needed ruling that domestic abusers cannot possess firearms. It's a victory for all of us.

Under the second amendment, every United States citizen has a right to bear arms. Even ones under FBI scrutiny. Even ones on the "no-fly" list, as the tragedy in Orlando reminded us all. This is part of the reason that more than 30,000 people die in this country each year from guns—and that, each year, this country sees nearly 33,000 firearm incidents related to domestic violence.

That's why the Supreme Court ruled on Monday to uphold the 1996 law that makes it illegal for anyone convicted of a misdemeanor domestic abuse charge to have a gun—regardless of whether they "intended" to abuse their spouse or not (the two defendants in the Supreme Court trial argued that because they did not intentionally abuse their victims, they should be allowed to have guns).

Domestic violence affects one in four women and one in seven men in the United States, of which guns play a prominent and sometimes fatal role. Research shows that in homes where there is domestic violence, the presence of a gun increases the risk of homicide for women by 500 percent. This dangerous link—and in such a prevalent epidemic—makes it even clearer that we need to pass gun control legislation. Stopping domestic violence is one issue that can and should have real bipartisan support.

"If their arguments had been accepted, there would be less consequences for a drunk domestic abuser than a sober one."

Let's go back, for a second, to the defendants' logic in this particular case. The lawyers for both men argued that because their clients were drunk or reckless when they abused their partners, they should not have been charged with misdemeanors and should, therefore, be allowed to keep their guns (despite otherwise spotty criminal records). But think about it: If their arguments had been accepted, there would be less consequences for a drunk domestic abuser than a sober one.

That is a terrifying prospect.

The Supreme Court thankfully ruled that the kind of intent behind a domestic abuse incident does not impact the charge an abuser receives. Flat out: Convicted domestic abusers cannot have guns.

SCOTUS's ruling keeps guns out of the hands of already violent Americans. And while we have yet to see any progress out of Congress on guns at large, at least we won this time.

Sam is a political commentator who served previously as the Senior Advisor to the National Security Advisor in the Obama Administration and as Deputy U.S. Treasury Attaché to Iraq. She holds a B.A. in Asian and Middle Eastern Studies from the University of Pennsylvania and Masters Degree in Security Studies from Georgetown. Follow her on Twitter.

Monday's ruling had some surprising dissenters. As Supreme Court-watching enthusiasts noted, this was the first time in 10 years that conservative Justice Clarence Thomas asked a question! And when the ruling was broadcast, it was actually his liberal colleague, Justice Sotomayor, who joined him in the dissent.

So why are a liberal and conservative justice joining together to dissent on gun ownership? Justice Thomas asked if there were any known cases in which a misdemeanor violation suspends a constitutional right. And Justice Sotomayor noted that "minor uses of force may not constitute 'violence' in the generic sense." Both valid points. But in the end, the majority of the court overruled.

This is ultimately a win for both parties. But we should never take our constitutional rights—or removing them—lightly. Justice Thomas was right to take pause over this decision.

And really, we all need to stop dismissing people who disagree with us about gun control as intolerant—or essentially allowing acts of terror to prosper. Especially Congress. Instead, Congress should focus on areas of bi-partisan agreement in a highly politicized election year.

We now have a precedent for working together: It was largely a bi-partisan acknowledgment—through the legislative process and the Supreme Court ruling—that we should keep guns out of the hands of convicted domestic violence offenders. And a bipartisan support was reached across both parties regarding people on the "no fly list" purchasing guns: Republican Senator Susan Collins and Democratic Senator Heidi Heitkamp introduced bi-partisan legislation to tackle this problem. While the proposal was voted down, it's significant that compromise legislation was introduced in the House and the Senate by Republicans and Democrats.

Liberals are championing their recent sit-in as evidence of their toughness of terrorism. But if Democrats are truly worried about terrorists' ability to harm Americans, they should look no further than the Obama administration's failed policies in Syria, Iraq, and Libya. Due to years of inaction and an incomplete strategy, civil war have spiraled out of control. But his administration has given ISIS a haven to plan attacks on the West and increase their propaganda machine.

The debate over the Second Amendment and the ability of Congress to curb rights granted by the constitution will rage on—beyond this week's Supreme Court decision. But for now, we have a ruling that advocates everywhere can cheer.

Morgan is a political analyst, the former Deputy U.S. Treasury Attaché to Saudi Arabia, and a current U.S. Navy Reserve Officer (her views are her own she does not speak on behalf of the military). She holds an M.B.A/M.A. from Johns Hopkins University in Business Administration and Government. Follow her on Twitter.

To read more about guns and domestic violence, see our feature story here.

Sam Vinograd Samantha Vinograd began her career as the Deputy U.S.
This content is created and maintained by a third party, and imported onto this page to help users provide their email addresses. You may be able to find more information about this and similar content at piano.io
Advertisement - Continue Reading Below
More From Politics
Senator Hirono on Her New Memoir 'Heart of Fire'
How to Demand Justice for Adam Toledo
Advertisement - Continue Reading Below
Daunte Wright's Death Sparks Protest in Minnesota
41 Surprising Rules First Ladies Have to Follow
Asian American Women on Where to Go From Here
Syrian Journalists Reflect on a Decade of War
How to Show Your Support for the AAPI Community
Activist Lydia X. Z. Brown on Disability Justice
Elisa Crespo: "I'm Not Here to Make History"
What We Know About the Georgia Spa Shootings