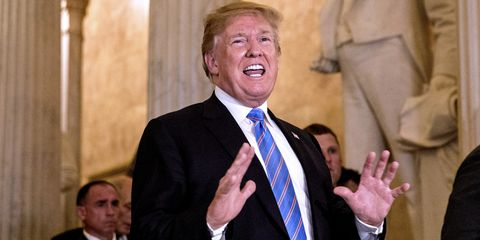 “Families Belong Together." "Separating families is a crime against humanity." "Where are the children?" "What country is this?" These are just some of the signs that flood the skies during marches protesting President Trump’s zero-tolerance policy. Right now, this policy is separating thousands of children from their families at United States borders.

Now, the title “Forced separation of illegal immigrant children” resides on Wikipedia’s “List of concentration and internment camps” in a table of contents that also includes Japanese World War II internment camps, Communist Camps in Yugoslavia, and The Third Reich.

A debate has struck up in the comments section beneath the post, among accounts with cheesy, internet-y names like “heat_fan1,” “The Anome,” and “Absolutelypuremilk.” Though on an incomparably smaller scale, these users argue with a similar verve that we are seeing amongst members of the U.N., Homeland Security officials, and members of the Trump administration. Both sides are loud, adamant, and each disputing the other. One Wikipedia commenter writes that the detainment of these children is not technically internment, because eventually their parents will receive trial. A shocking number of other users defended him, arguing that the children's cases are being “processed” for eventual release and thus this is “not imprisonment.”

At press time, there is little mention on the page about the separation of families as a violation of human rights. Most comments focused on whether the children were existing in a prison-like space. “The Anome” wrote: “This is a list of concentration and internment camps, and these are very clearly internment camps. For children. In America. In 2018. For shame.”

The Associated Press has released a gallery of photos from inside one of the spaces in which children are being held in Texas — complete with fences, orderly lines of children, and thin mats and foil sheets as bedding on the cement floor.

Trump’s zero-tolerance policy has resulted in the detainment of children away from their families. His Twitter account defends this; he scathingly generalizes and demeans the parents, rejecting them as “criminals” and urging Americans, in an characteristic all-caps Twitter outburst, to "change the laws."

Because of its collaborative, editable status, we are conditioned to regard Wikipedia as a faulty information source—a site that invites commentary and editorial privileges to any individual with internet access is a site that perhaps grants too large a stage for a generation infatuated with its own voice. But Wikipedia is a pinnacle of our culture, flawed or not. It is often the first search result when we look up an answer or definition. To "Wiki" something is a verb. Wikipedia offers timelines, definitions, plot lines, and lists. The very fact that this event exists, right now, on Wikipedia’s list of internment and concentration camps is something big—something horrific—despite any debate or definition about whether it deserves to be there.

Zoe Harris Zoe is a contributing writer at MarieClaire.com; she covers celebrity and news.
This content is created and maintained by a third party, and imported onto this page to help users provide their email addresses. You may be able to find more information about this and similar content at piano.io
Advertisement - Continue Reading Below
More From Politics
How to Help Black Lives Matter If You Can't Donate
Does Your State Have a Tampon Tax?
Advertisement - Continue Reading Below
What's Ranked-Choice Voting? Allow Us to Explain
Paid Leave for All Isn't Just a 'Women's Issue'
Yes, Caregiving Is Essential Infrastructure
Unforgettable Signs From the Protests
23 Ways Women Still Aren't Equal to Men
Ma’Khia Bryant: What We Know
Greta Thunberg Expertly Trolled Boris Johnson
The Hope and Heartbreak of Derek Chauvin's Verdict