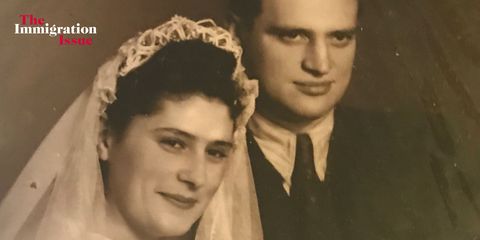 Like many people, I have tried to ignore the comparisons made between Trump and Hitler. In no way does the brutal genocide of millions compare to even Trump's most egregious policies. Yet, when I learned that Border Patrol were ripping children from their parents at the border, much like they were separated in Hitler's camps, I knew I had to talk with Mira.

Mira Rosenblatt, 93, is a Holocaust survivor. We met when I began co-writing a book about growing up in Nazi Germany. Mira had told me about her life, her separation from her parents, and her ultimate escape from a death march that left her hiding in below-zero temperatures, eating ants for sustenance.

At first, I was afraid to ask Mira her thoughts on the White House's family separation policy. I didn’t want her to think I was comparing her experience—the systematic murder of her entire family—to what is taking place along the border now. But I knew that nobody could put the current situation in context like Mira could. So I asked.

In response, Mira told me about the first time her family was torn apart. It would not be the last. “The Germans came to our house and ripped the locks and found the girls," Mira said. "They arrested my mother and beat her. They took her two miles away and made her work the ground. I got a permit, and went there." She added: "My mother was already spitting blood."

My mom said to take care of my younger siblings.

"I asked the Germans to let me work the ground and let my mother rest. They said, 'No,'" Mira recalls. "After two weeks, they released her...I saw my father. He had his beard ripped off and he had holes in his skin where he was bleeding. His teeth were knocked out." Her voice cracks.

It was not the worst of what they had to endure. In '42, Mira remembers, "all Jews had to come to the baseball stadium." How many people were there? "There were about 30,000 people gathered there. Everybody came because we were forced to go. If they catch you home, they’ll kill you."

Mira Rosenblatt
"It was so crowded," Mira recalls, "and people got trampled by the Germans' horses. The land was opening up and people prayed to be swallowed by the land." Mira threw her younger sister and brother into the bushes to protect them. It would be the last time she ever saw her parents, her older sister, and her cousins.

“Were there any final words exchanged between you and your parents?” I asked her.

“No," Mira said. "I didn’t think that would be the last time I saw them." She remembers one thing: "My mom said to take care of my younger siblings.”

Her younger siblings went on to die at the hands of the Germans, too.

Gently, I asked Mira: “What are you thoughts about the recent separation between Mexican migrant families at the US border, in relation to the Holocaust?”

With conviction, Mira replied: “There is no comparison. In Germany, we were legal citizens. Yet, we were still separated and killed."

But when I describe the steel cages migrant children are housed in, Mira tells me in return about the trains that took people to the death camps—trains in which hundreds of people were stuffed for days on end. This is not the only chilling similarity: According to the Texas Civil Rights Project, many undocumented parents along the border are being separated from their children—and "in some cases, the children were taken away under the pretense that they would be getting a bath.” This, of course, is what Jews and other marginalized individuals were told as they entered the gas chambers.

There is one huge distinction. In Nazi Germany, the systematic genocide of Jews and other marginalized groups was hidden. The gargantuan, heinous policy that was the Final Solution remained private. Today, we have the option to resist—to protest, donate money, call our representatives, and spread awareness. In Hitler's Germany, there was no such option.

You can find out how to help the immigrant children separated from their parents here.