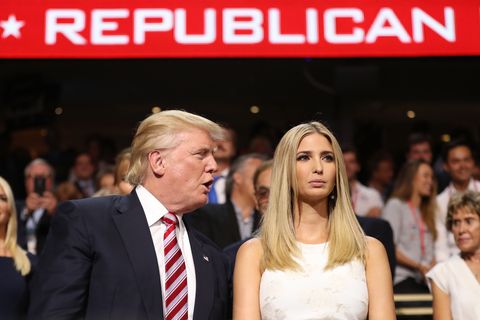 Last month, former Fox News host Gretchen Carlson sued the chairman and CEO of the network, Roger Ailes, claiming she was fired for rejecting his sexual advances. That led to many other women talking about a culture of sexual harassment at Fox News, and eventually led to Ailes leaving the network. But Republican presidential nominee Donald Trump recently made comments that suggested Carlson should have kept her mouth shut, and that women should just be strong enough to walk away from a job where harassment is common.

In an interview with USA Today, Trump declined to talk about specific allegations against Ailes, but did get in some serious trouble for comments he made about sexual harassment in the workplace. "There was quite a bit of fabulous things said [by Gretchen Carlson]," he said. "It would be easier for me and more politically correct for me to say you are right. But you would think she wouldn't say those things."

When writer Kirsten Powers asked what he would do if it were his daughter, Ivanka, who was dealing with harassment, he responded, "I would like to think she would find another career or find another company if that was the case." It's an answer that demonstrates a large degree of privilege. Of course, Ivanka could afford to try a new career, but many women can't, and are forced to endure harassment just to make ends meet, fearing the retribution that Carlson allegedly faced.

Ivanka's brother, Eric, told CBS This Morning that sexual harassment in the workplace "should be addressed strongly," but then insinuated that Ivanka simply wasn't the type of woman who would accept that kind of behavior. "I think what he's saying is, Ivanka is a strong, powerful woman, she wouldn't allow herself to be objected to it," he said, "and by the way, you should take it up with Human Resources, and I think she would as a strong person, at the same time, I don't think she would allow herself to be subjected to that."

That got Ailes' former employee, Megyn Kelly, to issue a one-word response that basically says it all: