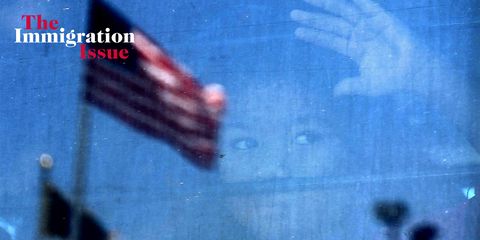 Did you know that Madeleine Albright, Liz Claiborne, Oscar de la Renta, Albert Einstein, and Joseph Pulitzer were all immigrants to the United States? So are cofounders of YouTube, Yahoo, and Google. Starting in elementary school, children learn about the legions of people who have come here to forge a better life; that dream is part of our national identity.

When Claudia Romo Edelman, founder of the We Are All Human Foundation, came to see me in May, we hatched a plan to devote an issue of Marie Claire to immigration. We had no idea that President Donald Trump would force the issue into headlines just four weeks later, and we were astounded to learn the U.S. government was separating nearly 3,000 minors from their families at the Texas–Mexico border, detaining children in cages.

[pullquote align='left']Their stories of hope, struggle, and triumph remind us of what makes America great.[/pullquote]

So we made a long list of accomplished women, either immigrants themselves or the daughters of immigrants, and asked them for their stories. Model and activist Christy Turlington Burns wrote about her mother’s arrival from El Salvador in 1948. Actress Priyanka Chopra told us about leaving India at 12 to attend school in Cedar Rapids, Iowa. Nigerian-born author Chimamanda Ngozi Adichie came to the U.S. at 19 to pursue higher education. Even federal judge Dolly Gee, who rejected the Trump administration’s request to detain migrant children long-term, is the daughter of immigrants from China. Their stories of hope, struggle, and triumph are all powerful, and they remind us of what makes America great. One of the most moving is the most recent. A 16-year-old girl from El Salvador tells of her time in a Texas detention facility in June, caring for a toddler who was on her own. For ways to help families immigrating to the U.S., visit marieclaire.com/border-crisis-help.

This September, at its General Assembly, the United Nations will consider a global agreement on migration that calls for safe, orderly, and regular migration, with the hope that it will be ratified by member states in December. We believe there is more that unites than divides us and that America, whose strength comes from difference and diversity, should be a country of open arms instead of closed borders.

A version of this article appears in the September 2018 issue of Marie Claire.

[editoriallinks id='33606ad6-816f-40eb-a374-c7dbcd455f9d'][/editoriallinks]
This content is created and maintained by a third party, and imported onto this page to help users provide their email addresses. You may be able to find more information about this and similar content at piano.io
Advertisement - Continue Reading Below
More From The Immigration Issue
Constance Wu Is Diversifying Hollywood
How Immigration Shaped These Top Female Execs
Advertisement - Continue Reading Below
Priyanka Chopra on Being a Working Immigrant
Female Leaders Share Their Immigration Stories
Camila Cabello's Story of Crossing the Border
Famous Women Tell Their Immigration Stories
Meet the Judge Fighting For Detained Children
The Women Fixing How the U.S. Treats Immigrants
"I Was Taken to a Huge Cage"
Christy Turlington Burns' Immigration Story