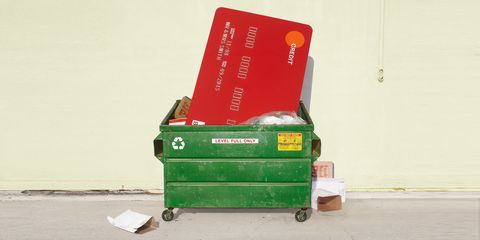 "I found that Wells Fargo had opened a money market account and transferred every penny from both my checking and savings into it."

Back then, I took my precious entry-level paychecks and deposited them in person at the Wachovia near my office. While I was using that branch, Wachovia was acquired by Wells Fargo in the fallout from the recession, and the blue-and-green signs were swapped out for red-and-yellow ones.

The color update was the only change I really noticed. That and the questions.

I'd deflect in different ways when they suggested I open a money market account. Okay, I'll think about it. Okay, give me a brochure. Okay, let me just see what the form looks like. I didn't know what a money-market account and didn't really care to know yet. That money was mine; I wanted and needed to watch it build up exactly where it was. I wanted to feel safe and adult.

The same day that I accepted the form to open the money-market account, I stuffed the form into my purse. A few hours later, I popped out to buy my boss a magazine and three slices of dried mango, as I did every afternoon. My debit card was declined.

I felt that immediate hot flush of a cashier alerting you to the fact that you have failed in a basic way. I asked him to run it again, and again. How can a debit card be declined? Especially when I had deposited money that very day? I apologized and ran out and went to my computer and logged into my online banking—and found that Wells Fargo had opened a money-market account and transferred every penny from both my checking and my savings into it.

I called Wells Fargo's customer service in a panic, asking how this could have happened. Every person on the other end of the line was unperturbed. They told me they'd move the money back into my accounts, but that I wouldn't have access to it—to my own money—for 24 hours while they did. I had to ask my mango-starved boss for $20 to get myself home that night.

"My debit card was declined. I felt that immediate hot flush of a cashier alerting you to the fact that you have failed in a basic way."

At a meeting at the branch near my office, I recounted the events as if I were filing a police report, but I wasn't; I was simply telling the teller's boss what had happened. The manager, who was one of the first Wells Fargo staffers there to help the Wachovia folks transition, said they'd had this problem with the teller before. She said they'd deal with it. I assumed she would. I left even more determined not to let anyone touch my money.

I wasn't particularly shocked, then, when the news broke a few weeks ago that Wells Fargo had opened two million accounts may or may not have been authorized by their customers. I was mostly just stunned that CEO John Stumpf refused to resign. I was sickened by the fact that he didn't fire a single senior executive. That he was willing to maybe consider forfeiting $41 million in equity from his compensation package while I was squirreling away $10.31 an hour.

My paranoia and deep suspicion have been confirmed again and again by American financial institutions—and they've stuck in my spending habits.

Most millennials, like me, don't invest or buy homes or take up retirement accounts. After all, how are we ever supposed to trust banks when we came of age at the exact moment when the entire world learned that none of these emperors were wearing any clothes?

Kaitlin Menza Kaitlin Menza is a freelance features writer.
This content is created and maintained by a third party, and imported onto this page to help users provide their email addresses. You may be able to find more information about this and similar content at piano.io
Advertisement - Continue Reading Below
More From Politics
Report Finds Andrew Cuomo Sexually Harassed Women
Gwen Berry: Athlete, Activist, Olympian
Advertisement - Continue Reading Below
The Anti-Choice Endgame: Power And Control
Give Domestic Workers the Protections They Deserve
Kristin Urquiza Wants Justice for COVID-19 Victims
A Breakdown of VP Harris's Net Worth
WH Announces Removal of the Hyde Amendment
What Liberation Means This Juneteenth
Kathryn Garcia: It's Time to Step Up or Shut Up
A Valedictorian Speaks Out Against Abortion Bans