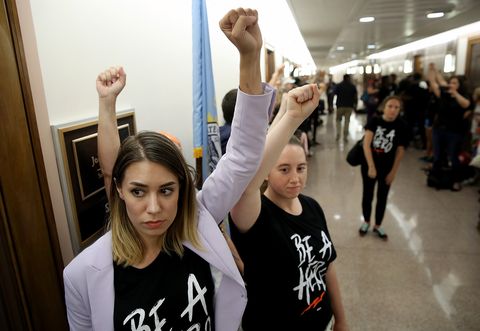 There are a thousand reasons someone might not report a sexual assault. The fear of retribution. The knowledge that, most of the time, justice won't be served. The risk of being blamed for what they were wearing, what they were drinking, and how they did or didn't behave. Too often, we don't believe survivors when they speak out—but when they don't, we use that as another reason to distrust their account. This lose-lose situation for survivors is the impetus behind Monday's #BelieveSurvivors walkout.

On Monday, individuals all over the country will walk out of their schools and workplaces in support of survivors, and specifically in support of Christine Blasey Ford and Deborah Ramirez, who have accused Supreme Court nominee Brett Kavanaugh of sexual assault (which Kavanaugh adamantly denies) and have faced the full weight of a system stacked against allegations like theirs.

At 1 p.m. EST, allies and survivors will wear black, walk out, and, if they're comfortable, post to social media with the hashtag #BelieveSurvivors. The walkout, subtitled "Moment of Solidarity," is a symbol—that even if survivors feel alone when dealing with a faulty system, they are not. "You are not alone," goes the walkout's official message.

The walkout, initially planned around the relentless targeting of Dr. Ford, has expanded to note its support of Deborah Ramirez, who came forward to accuse Kavanaugh of an alleged assault in a New Yorker piece published Sunday night by Jane Mayer and Ronan Farrow. It will register its support of both women, but also serve as a message for the survivors who have dealt with a painful and triggering news cycle of late: You are not alone.

Women's groups and progressive nonprofits have thrown their full weight behind the walkout, including Planned Parenthood, EMILY's List, TIME's Up, the Women's March, and many others (the number of groups total more than 80). It comes at a watershed moment for the handling of sexual assault accusations in the wake of #MeToo—and, crucially, whether a powerful man like Kavanaugh can be felled by the women who have made such claims against him. Whether anything has truly changed since Anita Hill went head-to-head against Clarence Thomas.

Two things are at play here: The very real and terrifying question of whether we, as a society, will allow a man twice accused of sexual assault to be appointed to the highest court in the land, to make decisions on behalf of millions of women—and the equally real but more symbolic question of how we treat allegations of sexual assault. Whether it matters when it happened, how it came about, or whether the victim reported it to authorities. Many Republicans and commentators have already picked a side, and this march is designed to showcase the other one: We believe you. You are not alone.

If you'd like to join allies and survivors in the walkout today, you don't have to be wearing black. All you have to do is walk outside (if you're able to do so), and post your support to social media via the hashtag #BelieveSurvivors. With a staggering proportion of Americans victims of sexual violence, it's likely that your message will reach somebody who needs to hear it: You are not alone.

Related Stories
If Kavanaugh Is Confirmed, This Could Happen
Women Are Using This Hashtag as a Rallying Cry
Jenny Hollander Director of Content Strategy Jenny is Marie Claire’s Director of Content Strategy, editing and writing about everything from politics to reality television to accessories and celebrity news.
This content is created and maintained by a third party, and imported onto this page to help users provide their email addresses. You may be able to find more information about this and similar content at piano.io
Advertisement - Continue Reading Below
More From Politics
For Teachers, Going to Work Can Mean Life or Death
Want to Help Moms? Prioritize Menstrual Equity
Advertisement - Continue Reading Below
Abortion Rights Start at the State Level
All of Your Abortion Questions Answered
The Texas Abortion Snitch Site Is Having a Bad Day
The Future of Afghan Women Depends on Us
How You Can Help People in Afghanistan
Andrew Cuomo Has Resigned as NY Governor
Gwen Berry: Athlete, Activist, Olympian
The Anti-Choice Endgame: Power And Control