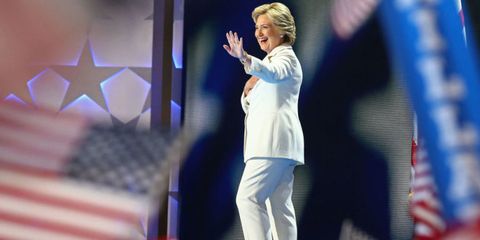 Some women are choosing to wear white to the voting polls tomorrow and no, it's not just because of Hillary Clinton's pantsuits. The movement of sporting the ivory color scheme precedes the presidential nominee's candidacy; it's actually a tribute to the American suffragettes, who donned the same hue while fighting for women's right to vote.

Thanks to a grassroots movement on social media, #WearWhiteToVote has become a trending topic on Twitter and Facebook, as women pledge to participate in the sartorial trend on Election Day.

#WearWhiteToVote in honor of our foremothers who fought, suffered, and even died to win the vote for women. pic.twitter.com/07ESXhZsAl

Let's all wear white on election day to pay tribute to the suffragettes. Who's with me? #WearWhiteToVote #Suffragette pic.twitter.com/ybge3DUFog

In honor of the women who helped me secure my right to vote, I will wear white! #WearWhiteToVote

Even Hillary Clinton gave a subtle tribute to the Women's Movement when she sported all-white pantsuits at the Democratic National Convention (as the first female nominee of a major political party in the U.S.) and at the third and final presidential debate.

Join in on the movement and shop the look below. (Maybe even swipe on this red nail polish while you're at it.)