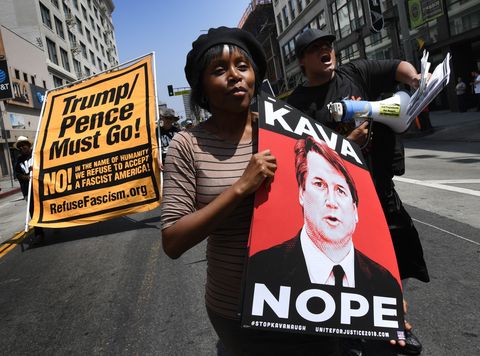 What looks to be a massive march across Washington, D.C., will take place Thursday, as women protest the possible confirmation of Brett Kavanaugh to the Supreme Court. Beginning at 1 p.m. EST, protesters will march from Kavanaugh’s current courthouse, the Barrett Prettyman Federal Courthouse (where he’s a judge in the D.C. Court of Appeals), to the Supreme Court building. The Women’s March and the Center for Popular Democracy organized the protest, and if the second group sounds particularly familiar right now, it’s because Ana Maria Archila—one of the sexual assault survivors who approached Senator Jeff Flake before the Senate Judiciary Committee—is the organization’s co-executive director.

In a statement, organizers said the purpose of the march is “to send a message: Abusers don’t belong on the Supreme Court.” The statement also quoted Archila, who said, “Last week, we proved that people coming together and sharing their stories can change the course of history...We stand together here, in sisterhood and community, to demand that our Senators look at us and keep Brett Kavanaugh from becoming a Supreme Court Justice."

In the same statement, organizers pointed to the other protests against Kavanaugh that have gone on since his nomination was announced a few months ago:

“After Trump announced his nominee in July, Women’s March members spent the rest of the summer visiting Senate district offices all over the country to #CancelKavanaugh. Women’s March co-chairs Linda Sarsour and Bob Bland were among the first arrested during the Kavanaugh hearings on September 4. Since, 300 women and allies have been arrested for engaging in their constitutional right to peacefully protest, and survivors have hosted solidarity speak outs in 30 states in front of Senate Offices.”

Other event organizers include MomsRising, The Leadership Conference, and the Black Women’s Roundtable. If you’re in the D.C. area and want to participate, below is the slated schedule for events:

Senator Mitch McConnell is pushing for a vote to end debate on the floor for Friday, which means a final confirmation vote could happen as early as Saturday. That means that now is the time to make your voice heard and tell your representatives how you feel about Brett Kavanaugh serving a lifetime appointment on the Supreme Court.

And your voice is important even if you’re not near the D.C. area. Make sure to call your Senators and put the pressure on them. If you need help figuring out what number to call, the ACLU can route your call here.

Related Story
9 Powerful Quotes from Dr. Ford's Hearing
This content is created and maintained by a third party, and imported onto this page to help users provide their email addresses. You may be able to find more information about this and similar content at piano.io
Advertisement - Continue Reading Below
More From Politics
Kristin Urquiza Wants Justice for COVID-19 Victims
A Breakdown of VP Harris's Net Worth
Advertisement - Continue Reading Below
WH Announces Removal of the Hyde Amendment
What Liberation Means This Juneteenth
Kathryn Garcia: It's Time to Step Up or Shut Up
A Valedictorian Speaks Out Against Abortion Bans
Standing Between Care and Violence
Seeking Healing a Century After the Tulsa Massacre
What to Know about Texas's Abortion "Trigger Ban"
A New Book Invites Us to Rethink Menstrual Equity