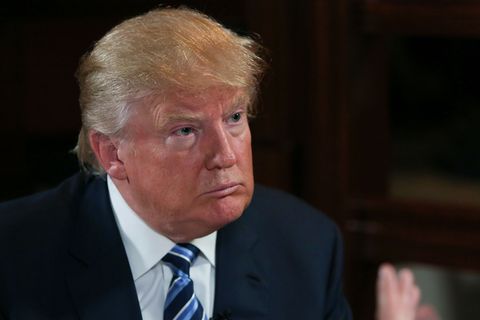 In the days since Donald Trump was elected president, a number of deeply troubling acts of hatred have been reported across the U.S., with Trump supporters targeting Hispanics, Muslims, women, homosexuals, and African Americans. In an interview Sunday with 60 Minutes — his first since winning the presidency— Trump spoked directly to the people committing these acts.

"I would say don't do it, that's terrible, because I'm going to bring this country together."

"I am so saddened to hear that," Trump said, "And I say, stop it. If it helps, I will say this, and I will say it right to the camera: Stop it."

Donald Trump to those committing hate crimes against minorities: "Stop it." pic.twitter.com/gG0jgVxYgE

Trump also expressed surprise at hearing that people were acting in this way. "I am so saddened to hear that," he said.

Later in the interview, Stahl mentioned that minorities feel frightened by a Trump presidency.

"I think it's horrible if that's happening," he said while casting blame on the media. "I think it's built up by the press."

Since ELLE.com first reported on the hate crimes following Trump's election, many more have surfaced.

Michael Sebastian Michael Sebastian was named editor-in-chief of Esquire in June 2019 where he oversees print and digital content, strategy and operations.
This content is created and maintained by a third party, and imported onto this page to help users provide their email addresses. You may be able to find more information about this and similar content at piano.io
Advertisement - Continue Reading Below
More From Politics
Where Senators Stand on Replacing RBG in 2020
Ruth Bader Ginsburg's Most Iconic Quotes
Advertisement - Continue Reading Below
RBG's Deathbed Wish Was a Message for Trump
Can a SCOTUS Justice Be Replaced in 2020?
The World Reacts to Ruth Bader Ginsburg's Death
Ruth Bader Ginsburg—Woman, Justice, Icon—Has Died
How to Make an Impact in the 2020 Election
About Those Ballot Drop Boxes—Here's What to Know
New Abortion Finder Tool Helps Women Find Care
How to Help Demand Justice for Breonna Taylor