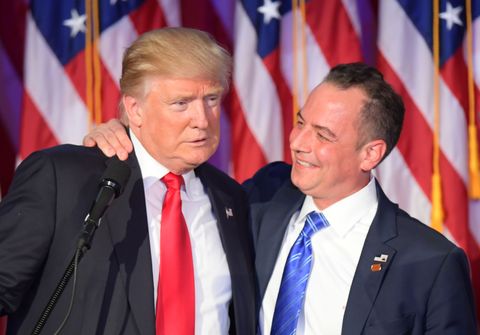 Donald Trump named Reince Priebus his chief of staff, giving the chairman of the Republican National Committee a prominent place in his White House. As chief of staff—which is the highest-ranking employee in the White House—Priebus has the ear of the president, but he'll also need to share his access to President-elect Trump with Steve Bannon, Trump campaign chairman and executive chairman of the conservative website Breitbart News, who was named chief strategist and senior counselor to Trump

"Steve and Reince are highly qualified leaders who worked well together on our campaign and led us to a historic victory," Trump said in a statement. "Now I will have them both with me in the White House as we work to make America great again."

It's an unusual arrangement, according to CNN, which said the White House will now have two centers of power: Priebus and Bannon.

For Priebus, 44, the new position is a culmination of his efforts to not only get Trump elected president but also see Republicans maintain their majorities in the House and Senate.

Here are ten things to know about Priebus:

1. He had a close working relationship with Trump.

During his acceptance speech, Trump called Priebus to the microphone, saying he was a "superstar" with whom he never had a "bad second." Unlike many Republicans, Priebus remained neutral on Trump during the primary and then, once he became the party's nominee, threw his support behind him.

Trump and Priebus worked together closely as the general election kicked into high gear, with Trump's team relying on the Republican Party's infrastructure to run its campaign. Priebus, the New York Times said, sought to "smooth [Trump's] rough edges."

2. He ran for public office only once—and lost.

In 2004, Priebus, who was a partner at the Milwaukee-based law firm Michael Best and Friedrich, ran for a seat in the Wisconsin State Senate but lost to the Democratic incumbent.

3. He's the longest-serving chairman of the Republican National Committee.

Priebus was elected chairman of the Wisconsin Republican Party in 2007—at 32, the youngest person ever to hold this position. In this role, he helped turn Wisconsin from a state run by Democrats to one that is overwhelmingly Republican. In 2010, both Wisconsin state legislatures flipped Republican and Republican Scott Walker became governor.

He did this, in part, by accepting Tea Party Republicans into the fold, according to the Washington Post. "Early on, when the jury was still out on where the Tea Party was going, Reince was there early making the case," Walker said in 2011. "He mainstreamed [the Tea Party] not by force but by commitment to the ideas of both the party base and the Tea Party movement."

In 2011, Priebus was elected chairman of the Republican Party and is the party's longest-serving chairman.

4. He urged Republicans to be a more inclusive party.

After Mitt Romney's defeat in 2012, Priebus oversaw the "Growth and Opportunity Project," a report—which some called an "autopsy"—to determine how the Republican Party should go forward.

The report said Republicans needed to appeal more to women. "Our candidates…need to use language that addresses concerns that are on women's minds in order to let them know we are fighting for them."

Trump, of course, used language throughout his campaign (and before it) that demeans women. When audio of Trump saying he grabs women "by the pussy," Priebus condemned the remarks. "No woman should ever be described in these terms or talked about in this manner. Ever," he said in a statement. Despite his condemnation, Priebus stood by Trump even as other Republicans withdrew their support.

The report also called for the party to abandon its anti-immigrant stance and be more welcoming to the LGBT community to attract young voters.

In 2013, Trump poured cold water over at least parts of the report, tweeting:

5. He believes marriage should be between a man and a woman.

Despite the report he co-authored saying Republicans should be more inclusive when it comes to gay rights, Priebus endorses a traditional view of marriage.

"I believe my kids and believe children should grow up with one father and a mother if possible, certainly with support—single parents, it's really hard," he said in 2011. "I don't believe anybody should be denied dignity in this discussion, everyone should be loved. But at the end of the day, I believe that marriage, through the sanctity of marriage, should be between one man and one woman."

6. He worked for the NAACP.

"Back then there was nothing strange at all about a Republican working with the NAACP Legal Defense Fund," he said. "I just think, in different places at different times, the organization has changed."

In 2012, Priebus compared the Democrats' insistence that Republicans are waging a war on women—specifically on their reproductive rights—to a "war on caterpillars." In other words, it's entirely made up.

Instead of walking back the statement, which drew considerable flak from the left, Priebus doubled down. "This war on women is a fiction the Democrats have created, and the real war on women is the war this president has put forward on the American people by not following through on his promises, by having women disproportionately affected by the economy," he said in a 2012 interview with MSNBC.

8. He is strongly pro-life.

Priebus has said that if "you're pro-abortion...you might not be a Republican." He's also pointed to a media bias up when it comes to reporting on Planned Parenthood. But when NBC's Chuck Todd asked why Republicans, who generally oppose government regulation of business, are so keen on regulating abortion clinics, Priebus dodged the question.

"The fact of the matter is we believe that any woman that's faced with unplanned pregnancy deserves compassion, respect, counseling," he said.

Todd pushed back, pointing out that women in Texas were forced to drive up to 300 miles to an abortion clinic. "Is that compassion?" Todd asked.

Priebus responded that Republicans' main concern was whether taxpayer money was being used to fund abortions.

9. He is married to his high-school sweetheart.

Priebus met his wife, Sally, at a church event when he was 18 and she was 16. Their first date was a political event, the Lincoln Day Dinner in Kenosha. Afterward, they went to a movie, he said. They went to prom together before breaking up briefly and then reuniting. The couple married in 1999 and have two children together.

Reince, which rhymes with "pints," is short for Rheinhold. His father is of German descent—Rheinhold is a German name—while his mother is of Greek descent (although she was actually born in Sudan, where she lived for 20 years).