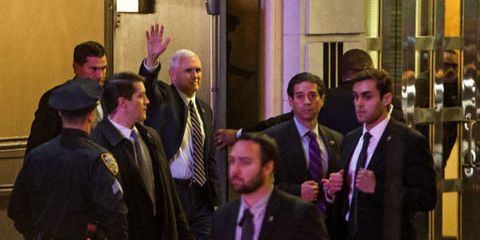 When vice president-elect Mike Pence went to see Hamilton on Broadway, he got more of a show than he bargained for. It started from the moment he walked in the building, with the entire audience booing him as he walked to his seat.

Yeah, sucks to be booed, but it also sucks to have your basic rights as an American citizen snatched away from you, so.

But Pence's grand Broadway treatment didn't stop there. At the end of the show, as he got up to leave, Brandon Victor Dixon—who plays Aaron Burr in the show—had a special message for him.

Tonight, VP-Elect Mike Pence attended #HamiltonBway. After the show, @BrandonVDixon delivered the following statement on behalf of the show. pic.twitter.com/Jsg9Q1pMZs

After acknowledging Pence and thanking him for attending, he appealed for him to "hear us out":

"We, sir—we—are the diverse America who are alarmed and anxious that your new administration will not protect us, our planet, our children, our parents, or defend us and uphold our inalienable rights. We truly hope that this show has inspired you to uphold our American values and to work on behalf all of us."

This sort of direct message is rare on Broadway, but it was one that was thought out by show creator Lin-Manuel Miranda, director Thomas Kail, and producer Jeffrey Seller, with input from the cast.

"We had to ask ourselves, how do we cope with this?" Seller told the New York Times. "Our cast could barely go on stage the day after the election. The election was painful and crushing to all of us here. We all struggled with what was the appropriate and respectful and proper response. We are honored that Mr. Pence attended the show, and we had to use this opportunity to express our feelings."

Theatergoer Christy Colbourn added that the crowd gave a standing ovation during the line "immigrants, we get the job done" and "do you know how hard it is to lead?"

I'm at #Hamilton and so is Mike Pence. Crowd booed him like crazy, and gave a standing O at the line "immigrants we get the job done" 1/2

2/2 Crowd went NUTS at King George's lines "when people say they hate you" & "do you know how hard it is to lead?" He had to stop the song.

Hamilton creator Lin-Manuel Miranda tweeted his support for the cast.

Proud of @HamiltonMusical. Proud of @BrandonVDixon, for leading with love.
And proud to remind you that ALL are welcome at the theater.

Celebrities have also weighed in on the talked-about night. Beauty and the Beast star Josh Gad posted a lengthy response to the situation.

As a member of the theater community, I have a message I feel compelled to share re: @HamiltonMusical pic.twitter.com/dhax0BEXjY

Of course, Donald Trump had something to say about his BFF's Hamilton experience, claiming that the "wonderful" Pence was "harassed" by the cast. "The Theater [sic] must always be a safe and special place," Trump tweeted. "The cast of Hamilton was very rude last night to a very good man, Mike Pence. Apologize!"

Our wonderful future V.P. Mike Pence was harassed last night at the theater by the cast of Hamilton, cameras blazing.This should not happen!

The Theater must always be a safe and special place.The cast of Hamilton was very rude last night to a very good man, Mike Pence. Apologize!

Chrissy Teigen took issue with Trump's response to the situation and took to Twitter with her thoughts—and to defend them against other users who disagreed.

We now live in an America where respectfully disagreeing with the president-elect's administration qualifies as "harassment." But hey—at least we've got Broadway.

Advertisement - Continue Reading Below
More From Politics
Hope Is Roe's Last Chance
Is Any Republican Running Against President Trump?
Advertisement - Continue Reading Below
Get to Know CBS News Anchor Norah O'Donnell
Everything We Know About Senator Warren's Husband
Mayor Pete's Husband Would Be a "First Gentleman"
How a Parkland Mom Turned Her Grief into Action
He Voted for Trump. She Voted for Bernie.
How Guerrilla Feminists Are Fighting Femicide
Who Was Mayor Pete's Father, Joseph Buttigieg?
Nancy Pelosi, Icon, Ripped Up Trump's SOTU Address