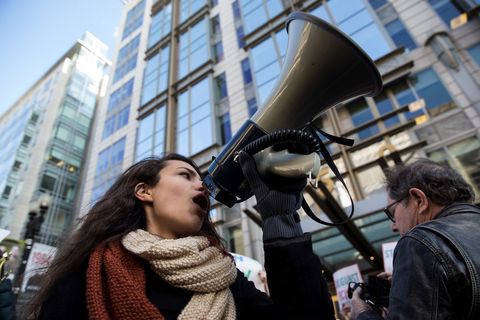 The Trump administration announced plans to change a mandate in the Affordable Care Act that would make it easier for employers to deny covering birth control by citing religious beliefs, the New York Times reported on Tuesday. The move comes, naturally, a week before the midterm elections and appears to be the latest ploy to appeal to Trump’s base of voters. In short, the rule change would allow companies to deny covering their employees’ birth control via insurance, meaning said employees would have to pay out of pocket for something that, according to the ACA, should be covered.

Related Story
What's at Stake for the Environment in November

A previous attempt by the administration last December to expand religious exemptions and deny millions of people access to birth control was struck down by judges. At the time, the Justice Department—the body seeking the rollback of the birth control mandate—issued a statement that disagreed with the ruling and cited “defending the religious liberty of all Americans” as the reason they would continue their attempts. It’s possible that these rules will be blocked as well, which only adds fuel to the theory that this announcement is more political than pragmatic, to be filed alongside Trump’s migrant caravan conspiracy theories and anti-press provocations in the wake of the terrorism threat to CNN.

According to CNN, last year’s proposed (and blocked) rule changes were twofold:

First, entities that have "sincerely held religious beliefs" against providing contraceptives would no longer be required to do so. The second rule would have extended the same provision to organizations and small businesses that had objections "on the basis of moral conviction which is not based in any particular religious belief."

It’s unclear exactly what this latest rule change would look like and when the administration intends to issue them (i.e. whether we’ll get this info before the election next week). But as the New York Times points out, the birth control mandate in the ACA is actually quite popular, so the move may actually backfire on Trump and the GOP.

Still, this latest proposal just further illustrates how Republicans are making anti-woman measures a part of their official party platform. Let's not go back to the Middle Ages.

The midterm election is next Tuesday, November 6. To find your polling place and other pertinent information, go to Vote.org.

Related Story
What to Know About Abortion and the Midterms
This content is created and maintained by a third party, and imported onto this page to help users provide their email addresses. You may be able to find more information about this and similar content at piano.io
Advertisement - Continue Reading Below
More From Politics
Report Finds Andrew Cuomo Sexually Harassed Women
Gwen Berry: Athlete, Activist, Olympian
Advertisement - Continue Reading Below
The Anti-Choice Endgame: Power And Control
Give Domestic Workers the Protections They Deserve
Kristin Urquiza Wants Justice for COVID-19 Victims
A Breakdown of VP Harris's Net Worth
WH Announces Removal of the Hyde Amendment
What Liberation Means This Juneteenth
Kathryn Garcia: It's Time to Step Up or Shut Up
A Valedictorian Speaks Out Against Abortion Bans