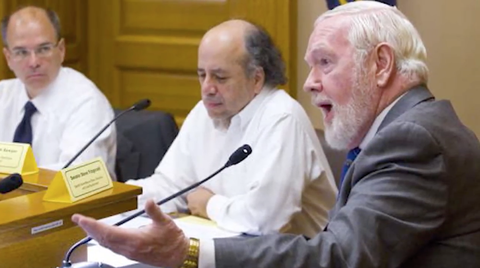 A Kansas legislator is standing by a comment he made in a letter comparing Planned Parenthood to a Nazi concentration camp.

Republican state Sen. Steve Fitzgerald of Leavenworth told The Kansas City Star on Monday that he considers Planned Parenthood worse than the Nazi regime in Germany.

"I think the Nazis ought to be incensed by the comparison," he said

Fitzgerald is a strong abortion opponent. He sent a letter to Planned Parenthood Great Plains last week after learning a donation had been made in his name.

He said in his letter on official Senate stationery that such a donation in his name was worse than "having one's name associated with Dachau." Dachau was the first regular concentration camp the Nazis created, according to the U.S. Holocaust Memorial Museum. At least 28,000 people died in Dachau, where Nazis also carried out gruesome medical experiments on prisoners.

The Planned Parenthood chapter tweeted a photo of the letter.

Sen. Fitzgerald did NOT appreciate having a donation to @PPGreatPlains made in his honor. Just FYI. https://t.co/raCPC9b3nX #ksleg #heinous pic.twitter.com/D5AbOgRfLM