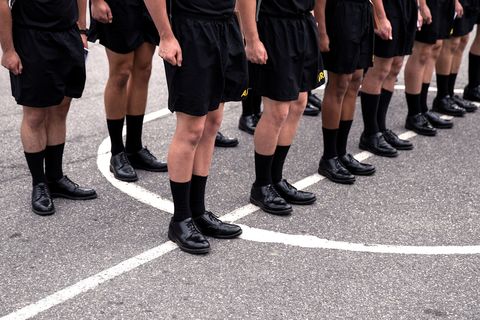 Reports of sexual assaults increased at two of the three military academies last year and an anonymous survey suggests sexual misconduct rose across the board at the schools, the Associated Press has learned.

The new data underscore the challenge in stemming bad behavior by young people at the military college campuses, despite a slew of programs designed to prevent assaults, help victims, and encourage them to come forward. The difficulties in some ways mirror those the larger military is struggling with amid revelations about Marines and other service members sharing nude photos on websites.

Assault reports rose at the U.S. Naval Academy in Annapolis, Maryland, and the U.S. Military Academy at West Point, New York, while dropping at the U.S. Air Force Academy in Colorado. The Air Force decline was sharp, going to 32 last year from 49 in 2015, contributing to an overall decrease in the overall number of reported assaults at the academies. The total reported cases fell to 86 from 91 in 2015, according to details obtained by The Associated Press.

Pentagon and military officials believe more people are reporting sexual assaults, which they see as a positive trend because it suggests students have more confidence in the system and greater willingness to seek help.

But the anonymous survey results suggest more assaults and crime occurring. They showed more than 12 percent of women and nearly 2 percent of men saying they experienced unwanted sexual contact.

In that survey, the largest increases in sexual misconduct were also at the Navy and Army academies. A vast majority of students said they didn't file a report on the assault because they didn't consider it serious enough. Many women said they took steps to avoid the perpetrator, while more than a third of the men said they confronted the person.

Senior defense officials expressed disappointment. They were particularly concerned more men and women said they experienced unwanted sexual contact. The rate two years ago was about 8 percent of women and 1 percent of men.

"This is almost a new population of folks every four years and that makes it a little bit more difficult for the messages to build up and gather momentum," said Nate Galbreath, deputy director of the Pentagon's sexual assault prevention office.

Officials struggled to identify a reason. They said some blame may fall on student leaders and how much they are willing to emphasize and enforce sexual assault prevention programs among peers.

Galbreath said sexual assault prevention instruction may be getting lost amid the many messages about social behavior, including not drinking and driving, or texting and driving.

The Pentagon, he said, is encouraging the academies to increase the amount of time they spend talking about how future leaders must foster a climate of dignity and respect. He said students should know that enforcing good conduct is something they will need to do as officers when they graduate and lead troops in combat.

In recent months, military leaders have met to try and find what Galbreath called the "holy grail of prevention."

One example, he said, would involving taking more to the students about when and how to intervene when they see a bad situation developing. Such scenarios include when they are in a bar drinking or in a workplace in which a boss is the problem.

"What we want those folks to do at the academies is to find those things that seem to really be hallmark situations and help people be better scouts and identify those precursors earlier and also give them a wider range of things that they might be able to do to intervene," Galbreath said.

Galbreath and Van Winkle said drinking remains a major concern, factoring in about 60 percent of incidents women cite and nearly half of those men cite. They said the academies have been putting alcohol programs in place, including some that require students to take a class before turning 21.

The overall total fell to 10 last year from 28 in 2015. The anonymous survey showed roughly half of the women and slightly more than 10 percent of men saying they were sexually harassed, near the same level as the previous survey. The surveys are conducted every two years.