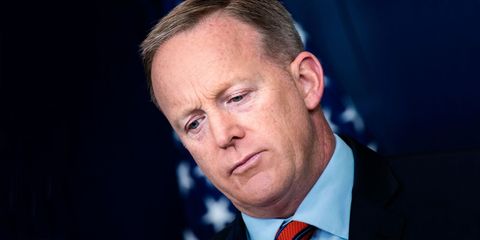 In a briefing Tuesday, the White House press secretary said that at least Hitler "didn't sink to the level of using chemical weapons" like the Syrian president, who last week dropped sarin nerve gas on his own people and prompted strikes from the U.S. at President Trump's—or Ivanka's—command. That, of course, is blatantly false: Hitler gassed millions of Jews in Europe during the Holocaust using Zyklon B, a lethal chemical pesticide.

Given a chance to clarify, Spicer made it worse.

Press Sec. on Hitler/Assad comments: "He was not using the gas on his own people the same way...he brought them into the Holocaust centers." pic.twitter.com/mO9EsWM4QT

"He was not using the gas on his own people the same way that Assad is doing," he stumbled. "I mean, there was clearly...there was not...he brought 'em into the Holocaust centers."

Holocaust centers. Or, as history likes to call them, "gas chambers."

Spicer continued, tripping over his words. Hitler, he argued, didn't use chemical weapons "in the way that Assad used them where he dropped them down into the middle of towns."

Update, 4/11 at 3:15 p.m.: The White House issued a statement shortly after the briefing ended, saying he was "trying to draw a contrast" between Hitler's tactics and Assad's.