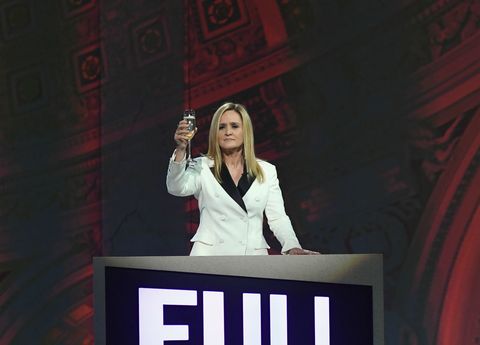 The world has survived 100 days of the Trump administration! A cocktail is in order.

At the after-party for her Not the White House Correspondents' Dinner, Full Frontal host Samantha Bee celebrated with journalists, celebs, and her staffers on the rooftop of the W Hotel in Washington, DC. The space featured several amusing touches, like the "Drunk Dial Your Legislator" phone booths, but perhaps the best detail was the drinks menu.

The party offered three specialty cocktails, with each of their names referencing President Donald Trump. "Bad Hombre" is what he has called potentially dangerous Mexican immigrants, while "Nasty Woman" was an insult he hurled once at his presidential opponent Hillary Clinton. The "Orange Russian" is a citrus twist off the more traditional White Russian, nodding to Trump's skin tone and relationship with the foreign power.

While the first two options sound delicious and refreshing, an Orange Russian demands a strong stomach. A coffee-flavored liqueur mixed with orange juice? It's like a breakfast gone all wrong. Anything for a laugh, though. Bottoms up!

Kaitlin Menza Kaitlin Menza is a freelance features writer.
Advertisement - Continue Reading Below
More From Politics
Behind the Controversy at the Women's March
Women Are Not Granted Equality in the Constitution
Advertisement - Continue Reading Below
Electability Is About Us—Not the Candidate
Everybody Running for President In 2020
Time’s Up for Wall Street
Women of Color Ruled Last Night's Debate
Cory Booker, Rosario Dawson Are Traveling Together
Is Megyn Kelly a Feminist or What?
Door Knocking With Field Organizers in Iowa
“I Was Illegally Billed Seven Times for My Rape”