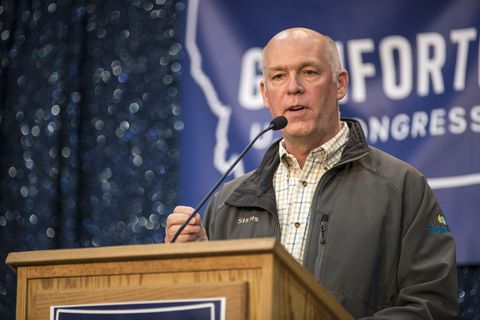 It would be apt to describe the United States's political climate as "tense" right now. But even that doesn't explain the allegedly bizarre behavior of Montana Republican congressional candidate Greg Gianforte, who late Wednesday was cited with assaulting a reporter.

Ben Jacobs, a political reporter for the Guardian, was the recipient of the alleged assault. Naturally, he tweeted about it:

There was a local TV crew there when Gianforte body slammed me. Audio is posting soon at @GuardianUS

The Guardian then released audio, collected from Jacobs's recorder, of the encounter. It features Gianforte screaming "Get the hell out of here!" repeatedly, before allegedly slamming into Jacobs and breaking his glasses. Jacobs had been asking Gianforte about the Congressional Budget Office report on the American Health Care Act, the Republican healthcare plan.

A Fox News team also present during the alleged assault wrote about it afterward. One member of the team, Alicia Acuna, wrote the following account:

"At that point, Gianforte grabbed Jacobs by the neck with both hands and slammed him into the ground behind him. [Other present Fox staff] Faith, Keith and I watched in disbelief as Gianforte then began punching the reporter. As Gianforte moved on top of Jacobs, he began yelling something to the effect of, 'I'm sick and tired of this!'"

Gianforte's campaign spokesman Shane Scanlon released the following statement following the alleged assault, which places the blame for the altercation squarely on Jacobs:

"[Jacobs] entered the office without permission, aggressively shoved a recorder in Greg's face, and began asking badgering questions. Jacobs was asked to leave. After asking Jacobs to lower the recorder, Jacobs declined. Greg then attempted to grab the phone that was pushed in his face. Jacobs grabbed Greg's wrist, and spun away from Greg, pushing them both to the ground. It's unfortunate that this aggressive behavior from a liberal journalist created this scene at our campaign volunteer BBQ."

Gianforte, a tech millionaire who is also a Young Earth creationist, had previously unsuccessfully run for Montana's governorship in 2016. This alleged assault takes place a night before a special election for Montana's only congressional seat. Gianforte's Democratic opponent, Rob Quist, is a folk singer who's been endorsed by Senator Bernie Sanders.

Gallatin County Sheriff Brian Gootkin released a statement about the incident, stating that while the alleged body slam wasn't serious enough to be a felony assault, Gianforte could be cited for misdemeanor assault. If convicted, he could face up to a $500 and/or up to six months of county jail time.

Local outlets like the Billings Gazette and the Missoulian have since pulled their support for Gianforte's congressional race. Polls close at 8 p.m. MT.