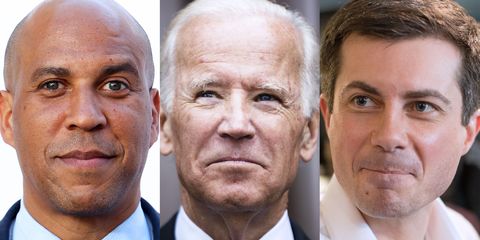 All over the country, reproductive rights are endangered. In March, Georgia passed a near-total abortion ban, which the governor signed into law Tuesday. Republican lawmakers in Alabama are trying to pass a law that would make performing an abortion a Class A felony. And today, women in states from coast to coast will jump through hoops—like waiting periods, state-mandated anti-choice “counseling,” and throngs of screaming protesters—just to get constitutionally-protected medical care.

Meanwhile, the Trump administration is hacking away at access to sex education, contraception, and abortion, not just in the U.S. but around the world. The Department of Health and Human Services has funneled funding away from comprehensive sex ed and towards programs that push abstinence, and tried to pull federal funding from health care organizations that perform abortions or refer patients to organizations that do. And the State Department has re-instituted the “global gag rule,” which denies foreign aid to NGOs that perform abortions, refer patients to organizations that do, or even supports those fellow organizations.

Reproductive rights aren’t only about abortion, they’re about everything. If your school only teaches abstinence, you probably aren’t getting a quality education about sexual health. If you can’t afford contraception, it’s difficult to plan your career. If you can’t get an abortion, it’s almost impossible to pull yourself out of poverty. Which means that reproductive rights are about everyone.

There are more women running for the Democratic nomination than ever before, but opinion polling has only two women in the top six, and the most recent fundraising reports put just one woman in the top four. Female candidates are often assumed to be automatic proponents of reproductive rights (even though that’s not always the case). And, too often, male candidates aren’t pressed to be specific about if or how they’d protect abortion access—after all, it’s “just” a women’s issue, and a highly controversial one at that. But every single candidate, regardless of gender, should have a clear plan for defending this constitutional right. So, MarieClaire.com decided to ask the crowded Democratic field’s many, many dudes where they stand—and what they’ll do.

Let’s start with the man who’s leading opinion polls, former Vice President Joe Biden. Biden has a mixed record on reproductive rights: He’s been in public life since before Roe v. Wade was decided, and said at the time that the decision went too far because he didn’t think “that a woman has the sole right to say what should happen to her body.” He’s voted for so-called “partial birth” abortion bans, even though he’s conceded that he shouldn’t force his anti-choice views on others. Biden’s official website does not mention anything about women’s reproductive rights, rather, his section on health care simply states that he plans to “build upon the Affordable Care Act” and name-checks the opioid crisis and mental health as priorities. (I reached out to Biden's camp about the candidate's current stance on reproductive rights, but did not receive a response.)

Comparatively, Vermont Senator Bernie Sanders is outspoken in his support for reproductive rights. The Independent is championing Medicare for All, the expansion of government-run senior health care to the whole population, and his campaign says that under this plan, “all comprehensive reproductive health care would be covered as a right.” Right now, abortion is carved out from government-run coverage under Medicaid, meaning that poor women who rely on Medicaid have to pay hundreds of dollars out of pocket for abortions. Through his policy director, Sanders told me that he believes “we must fight back against any efforts to undermine a woman’s right to choose at the state, federal, and local level.”

New Jersey Senator Cory Booker is one of the rare male candidates with a track record of showing up for reproductive rights. In 2013, he co-sponsored the Women’s Health Protection Act, which would have limited the restrictions states can place on abortion providers, but that bill didn’t make it out of committee. In 2014 he called on Congress to reinstate the ACA’s contraception mandate, which was hollowed out by the Supreme Court that year. When asked about his position as a presidential candidate, a spokeswoman for Booker pointed to his support for the Affordable Care Act, which provides coverage for women’s health screenings and contraception, and noted that Booker is a “staunch defender of Roe” who “has stood with Planned Parenthood.”

At an April town hall in New Hampshire, former Texas congressman Beto O’Rourke linked Planned Parenthood clinic closures in his state to the spike in maternal mortality rates, a crisis he noted hits women of color three times harder than white women. “It’s not just—although this is important—a legal right to an abortion,” he told the crowd in Concord. “It’s a cervical cancer screening, it’s family planning, it’s just seeing a provider of any kind.” O’Rourke stressed the importance of “nominat[ing] judges, including those to the highest court in the land, who believe in a woman’s right to choose.” In the House, O’Rourke was one of many co-sponsors of 2017’s EACH Woman Act, which would have required Medicaid and other public health insurance programs to cover abortion, something they haven’t done since 1976. It, too, never made it out of committee.

Finally, there’s Pete Buttigieg, mayor of South Bend, Indiana, who has emphasized faith and family values in his surprise-breakout run. Buttigieg describes abortion as “a matter of conscience” and stresses the need to keep those matters private and unpoliticized. “It's a very complex issue that should be guided by a very simple principle, which is that having these things dictated by government does not make that decision any easier,” he said on Morning Joe. This is an admirable approach to what shouldn’t be a public or political question, but it’s not a policy prescription for something that has become both. As Mayor, Buttigieg has stepped in to resolve zoning disputes between abortion rights advocates and the people who would keep them out of South Bend, but anti-choice advocates are notoriously anti-compromise. So far, Buttigieg has given voters no sense of how he would protect a constitutional right under constant attack.

“Supporting reproductive rights goes beyond saying you stand with Planned Parenthood or support Roe v. Wade,” says reproductive justice advocate Renee Bracey Sherman. “I want to see male candidates show that they truly care about these issues by meeting us with real thought-out plans that they can explain, not platitudes and talking points.”

Yamani Hernandez, Executive Director of the National Network of Abortion Funds, agrees. Hernandez says it’s important to her that women’s health care doesn’t get sidelined or talked about as a niche issue. “Matters of whether, when, or how people make a family are human rights concerns—some of the most critical decisions we make as humans and families. Those are matters that matter to all of us.”

Bracey Sherman says male candidates need to be able to explain reproductive rights “as an important part of economic liberation for our nation,” and that she wants to see plans for rebuilding access to women’s health care “that are as intricate as how they plan to regulate the banks.”

Female candidates too. It’s true that women politicians aren’t always reliable proponents of reproductive rights, and in fact, they may feel the need to distance themselves from “women’s issues” in order to balance out voter discomfort at the idea of casting their ballot for a woman. (And the anti-choice movement has for decades been spearheaded by women, who can be more effective at undermining feminism than men are.) It matters that all candidates address reproductive rights, because they aren’t solely a women’s issue. They’re a civil rights issue, and an economic issue. They’re a question of who gets to participate fully in public life, and whose choices are curtailed by the government.

There are 10 million more women registered to vote in the U.S. than men, and women are more likely to vote than their male counterparts. Those women—and the people who care about them—deserve to know how their leaders will defend their rights.

Chloe Angyal's Dispatch from Iowa
Kamala Harris Wants To Pass The ERA. That's a BFD
The Cost of Child Care Is Crushing U.S. Families
Chloe Angyal Chloe Angyal is a journalist who lives in Iowa; she is the former Deputy Opinion Editor at HuffPost and a former Senior Editor at Feministing.
This content is created and maintained by a third party, and imported onto this page to help users provide their email addresses. You may be able to find more information about this and similar content at piano.io
Advertisement - Continue Reading Below
More From Dispatch from Iowa
Thoughts From a First-Time Caucus-Goer
Women of Color Ruled Last Night's Debate
Advertisement - Continue Reading Below
Door Knocking With Field Organizers in Iowa
AOC & Bernie: The First Couple America Needs?
15 Minutes With Elizabeth Warren
Noticeably Absent From the 3rd Debate: Abortion
Biden's Record Can't Hide From Gillibrand & Harris
A Beginner's Guide to Being a Political Wife
Cory Booker Gets Real About Reproductive Justice
The Cost of Child Care Is Crushing U.S. Families