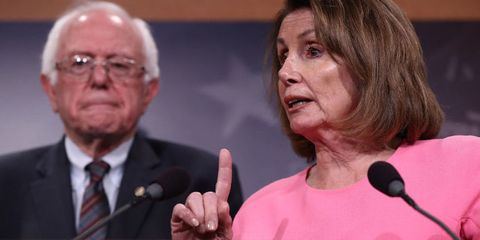 Let's cut right to it: A law that bans abortion is a law that mandates pregnancy. And forcing women to be pregnant is a clear-cut denial of freedom. Between the continued state-level assaults on abortion rights and the news last week that the Trump administration plans to overturn Obamacare's birth control mandate, that freedom is directly in the line of fire. Which is why I'm so baffled by the spate of high-ranking Democrats suggesting that the left abandon reproductive rights as a core principle.

Last month, House Minority Leader Nancy Pelosi said Democrats are "not a rubber stamp party" and that abortion rights were "fading as an issue" for voters; Bernie Sanders supported an anti-choice mayoral candidate in Nebraska, saying "you just can't exclude people who disagree with us on one issue;" and Louisiana Governor John Bel Edwards argued at the DNC that the party would be more successful in the South if they supported anti-choice candidates.

It's humiliating to be put in the position of having to convince someone of your humanity.

But a woman's autonomy over her body and life isn't just "one issue" or a political strategy: It's a fundamental human right. In fact, the United Nations included lack of access to abortion in their 2013 report on torture and inhuman treatment, noting that denial of abortion care is gender-based abuse. In Pelosi's pivot away from abortion rights she also said, "In our caucus, one thing unifies us: our values about working families." How is preventing gender-based abuse not a value of working families? It goes to show how tenuous women's rights really are that leaders on the left would be willing to dismiss these truths in the name of political expediency.

Part of the problem is that expecting women to repeatedly defend abortion is dehumanizing in and of itself. In the weeks following Pelosi's and Sanders' comments, we relayed the statistics—as we have had to time and again—showing how curbing access to abortion hurts women. Or how laws passed under the guise of protecting women are little more than cruel roadblocks to necessary care. 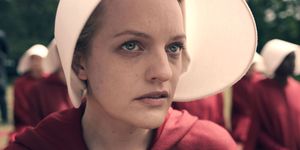 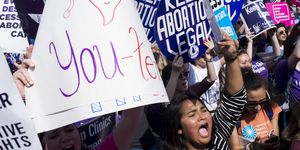 This Law Will Let Texas Doctors Lie to Women

We patiently go over the ways in which the right to have an abortion is a key part of economic equality and justice. We share our personal stories—often to a hostile reception—of how access to abortion made our lives better. Or, in my case, how an abortion protected my health and possibly my life. (The U.S. has the highest maternal mortality rate in the developed world, and is the only place where that rate is rising.)

But why do we still have to go to such great lengths? Making these arguments feels like begging for scraps. It's humiliating to be put in the position of having to convince someone of your humanity. I'm tired of women having to explain themselves to people who will never know what it feels like to be pregnant when you don't want to or cannot be.

How many studies need to be done? How many articles do we have to write, or stories do we have to share, before people will accept that a woman's ability to control what happens to her body is as necessary to her as oxygen? When will they realize that denying us this is deadly?

An abortion protected my health and possibly my life.

During times of political strife, it's always the rights of the most marginalized that are deemed expendable or strategically fraught. When George W. Bush was president, I remember the same arguments—we needed a "bigger tent," abortions rights were a "single issue."

But Democrats would do well to remember who greeted Trump on his first full day in office. It was women, millions of us, marching around the world and outside Trump's door to remind the new administration that we are here and that our rights and our humanity are not so easily ignored. If need be, we can show up at the Democrats' front steps, too.

Jessica Valenti Contributing Editor Jessica Valenti is a columnist and author of five books on feminism, politics, and culture.
This content is created and maintained by a third party, and imported onto this page to help users provide their email addresses. You may be able to find more information about this and similar content at piano.io
Advertisement - Continue Reading Below
More From Politics
Daunte Wright's Death Sparks Protest in Minnesota
41 Surprising Rules First Ladies Have to Follow
Advertisement - Continue Reading Below
Asian American Women on Where to Go From Here
Syrian Journalists Reflect on a Decade of War
How to Show Your Support for the AAPI Community
Activist Lydia X. Z. Brown on Disability Justice
Elisa Crespo: "I'm Not Here to Make History"
What We Know About the Georgia Spa Shootings
Dianne Morales Has Never Listened to the Naysayers
Stacey Abrams on Her Definition of Success