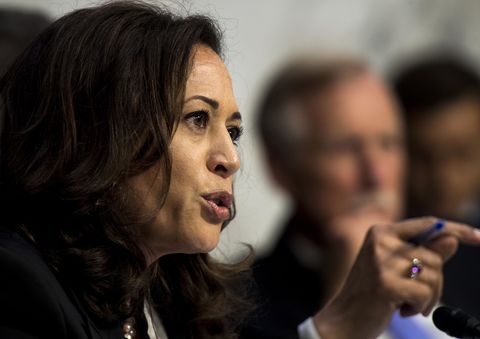 Today, the Senate Intelligence Committee questioned Attorney General Jeff Sessions for several hours about his knowledge of the investigation into possible collusion between the Trump campaign and Russia, with each senator allotted only a few minutes to get their asks out there. Many senators interrupted Sessions or spoke over him in order to cram in as many questions as possible, but only one senator was reprimanded by her colleagues for doing so.

Senator Kamala Harris (D-CA) started her line of questioning by reminding him of how often he chose to respond to questions with "I don't recall." Since his memory is so blank, did he ever keep any notes?

“I don’t know.”
“I don’t recall.”
“I don’t remember.”
Did you refresh your memory with any written documents? #SessionsHearing

Harris continued to pummel Sessions with questions, which the attorney General said made him feel "nervous." Luckily, he had Senator John McCain (R-AZ) to come to his defense.

"Chairman...Chairman, the witness should be allowed to answer the question," McCain interrupted Harris, at which Sessions smiled and then laughed out loud. Senator Richard Burr (R-NC), agreeing with McCain, implored Harris to pause in her questioning. 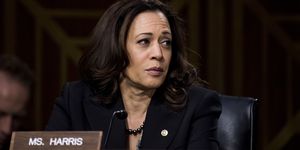 Kamala Harris\'s Reaction to Being Cut Off

Kaitlin Menza Kaitlin Menza is a freelance features writer.
This content is created and maintained by a third party, and imported onto this page to help users provide their email addresses. You may be able to find more information about this and similar content at piano.io
Advertisement - Continue Reading Below
More From Politics
Kristin Urquiza Wants Justice for COVID-19 Victims
A Breakdown of VP Harris's Net Worth
Advertisement - Continue Reading Below
WH Announces Removal of the Hyde Amendment
What Liberation Means This Juneteenth
Kathryn Garcia: It's Time to Step Up or Shut Up
A Valedictorian Speaks Out Against Abortion Bans
Standing Between Care and Violence
Seeking Healing a Century After the Tulsa Massacre
What to Know about Texas's Abortion "Trigger Ban"
A New Book Invites Us to Rethink Menstrual Equity