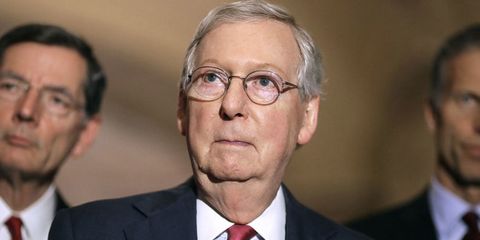 When Mitch McConnell ran for reelection in 2014, the senator from Kentucky released an ad in which his wife, Elaine Chao, defended McConnell's record on women's rights.

Funny thing: It was a deceptive ad. It claimed McConnell co-sponsored the original Violence Against Women Act in 1991, which is true, but that version of the bill never made it to a vote. He voted against the final version in 1993, and voted against it two more times in 2012 and 2013.

The idea that McConnell champions women's rights is laughable still considering his latest work in maneuvering the American Health Care Act through the Senate. The bill — which would strip Planned Parenthood of more than 40 percent of its total funding for a year, and includes draconian cuts to Medicaid, two-thirds of whose users are female — was drafted in secret by 13 men, including the majority leader.

But in McConnell's 20s and 30s, he displayed less conservatism when it came to women's issues. He used to be "firmly pro-abortion rights," according to Alec MacGillis, author of the 2014 McConnell biography, The Cynic. "He repeatedly snuffed out anti-abortion bills that were coming through his office [when he was a county executive in Kentucky]." He supported civil rights, and even attended Dr. Martin Luther King, Jr.'s March on Washington.

That changed once McConnell was elected to the Senate in 1984 (with the help of consultant Roger Ailes). He immediately aligned with the more conservative wing of the Republican party, according to MacGillis. His voting record has since been consistently anti-abortion. In 2015, he vowed to push a vote that would put a federal ban on abortions after 20 weeks. When Richard Mourdock, a Republican candidate for Senate, said that pregnancy from rape is "something God intended," McConnell came to Mourdock's defense.

While a senator, McConnell voted against the Family and Medical Leave Act, which guarantees 12 weeks of unpaid leave to employees dealing with an illness or caring for a child or sick family member. He opposes same-sex marriage. He also voted against the proposed Paycheck Fairness Act, or the Equal Pay Act, which attempted to address the gender pay gap. McConnell voted against the Lily Ledbetter Act, a bill that reset the statute of limitations on equal pay claims (this passed and was signed into law). He's voted against raising the federal minimum wage nearly 20 times, and women make up nearly two-thirds of minimum wage workers in America. McConnell did vote in 2015 not to defund Planned Parenthood, but explained that the vote was a procedural maneuver so that he could bring it up again in the future. He also spoke out in support of Republican legislation that would have allowed any employer to deny birth control coverage under the Affordable Care Act, saying that it was not an issue of contraception but religious freedom.

What MacGillis concluded in his book is that McConnell isn't driven so much by ideology as by a desire to keep winning elections (while he is extremely unpopular in his state, he is very good at raising money for campaigning). In 2013, Jason Cherkis and Zach Carter of the Huffington Post wrote that McConnell's "highest ideal" is "his own political survival."

So is there any chance that McConnell respects women, in an undercover, non-legislative sort of way? Hardly. Let's not forget his infamous and sexist silencing of Elizabeth Warren in 2016, which produced the feminist manifesto, "Nevertheless, she persisted." In 2013, he joked that the Democratic presidential hopefuls for 2016, including Hillary Clinton and Joe Biden, were like "a rerun of the Golden Girls." He criticized Clinton in 2015 specifically on the issue of gender, saying that "The gender card alone isn't enough." The next year, while he was running for re-election, McConnell said that gender discrimination was of negligible concern. "I could be wrong, but most of the barriers have been lowered," he said. And, of course, while he criticized Donald Trump for boasting about sexually assaulting women, McConnell did not rescind his support of the candidate when the Access Hollywood tapes surfaced.

STORY BY HELIN JUNG Helin Jung is a writer and editor based in Los Angeles.
This content is created and maintained by a third party, and imported onto this page to help users provide their email addresses. You may be able to find more information about this and similar content at piano.io
Advertisement - Continue Reading Below
More From Politics
In Conversation With Secretary Granholm
Laphonza Butler on What's Next for EMILY's List
Advertisement - Continue Reading Below
Anita Hill Believes We Can End Gender Violence
For Teachers, Going to Work Can Mean Life or Death
Want to Help Moms? Prioritize Menstrual Equity
Abortion Rights Start at the State Level
All of Your Abortion Questions Answered
The Texas Abortion Snitch Site Is Having a Bad Day
The Future of Afghan Women Depends on Us
How You Can Help People in Afghanistan